Miss Timmins’ School for Girls, by Nayana Currimbhoy, might be described as a mystery, a classic whodunit murder story.  But it can also equally be called a romance, a coming of age story, and an historical novel set in 1970s India.  It’s perhaps because this book is all those things and more that makes it such a successful, entertaining read.

Don’t start Miss Timmins’ School for Girls right before you go to bed, because this is a book that sucks you in immediately with a flash forward to the death that is central to the plot.  Of course, you remember that this death is going to happen as you keep reading, but because you hadn’t met any of the characters at that point, it starts to feel fuzzier and fuzzier until mid-book, when it actually happens and it’s shocking, and you can’t believe you’re only half way through the story.  What could possibly happen next?

The first part is a lot of fun to read: you follow Charu, a 21-year-old middle class “good Brahmin girl” whose parents are tentatively letting her out into the world, to work as a teaching at a British boarding school tucked away in a monsoon-ridden mountainous corner of India.  It’s the 70s, right, so there’s all that talk of free love, mind-expanding drugs, and new freedoms, and Charu has never heard of any of it until she’s introduced through her new friends, including a white girl raised in India who also happens to be a lesbian.  You can probably guess the romance that buds between the two women, and it’s pretty cute, and exciting, and realistic.  Currimbhoy does a great job with characterisation, making both women likable, flawed, and just complex enough to frustrate the reader sometimes.

But it’s only the first half of the book that focuses on the romance: just when I wondered how Currimbhoy was going to continue telling the story, she switches narrative perspective, and we suddenly start hearing it from the point of view of one of the girls at the school.  This was disorienting at first, but plot-wise very effective, allowing Currimbhoy to describe the action from a less emotionally involved and knowing angle.  In some ways I don’t want to say much about the second half, because it somehow feels like a spoiler, even though you actually find out who dies in the first few pages of the book.  But I think you’re meant to kind of forget, or at least this was my experience, so I don’t want to ruin it for you.

One thing I will tell you, is that we discover Charu isn’t exclusively attracted to women, which was a nice surprise for me, always on the lookout for dynamic bisexual characters.  Also, the teenage girls were really great to read about too: there’s something about the trope of all these girls pent up in a boarding school—especially this one, where the monsoons keep them stuck inside—that creates an atmosphere ripe for all sorts of mischief.  Also, I think I’m just attracted in some perverse way to the routine and orderliness of a boarding school—I’ve always kind of wished I could have gone to one (and got to wear the uniform).

Aside from the boarding school teen girl antics, there is of course a murder to be solved. I am notoriously terrible at this kind of investigation, so those readers who are schooled in figuring out whodunit would likely fare better than I did.  I was totally stunned by every twist, but, again, mystery is not my literary forte.  The thing is, the mystery is really only part of the novel, even in the second half, so if you’re either a mystery buff or someone who normally doesn’t read mystery, I think there’s a little something for everyone from this really standout first novel from Nayana Currimbhoy. 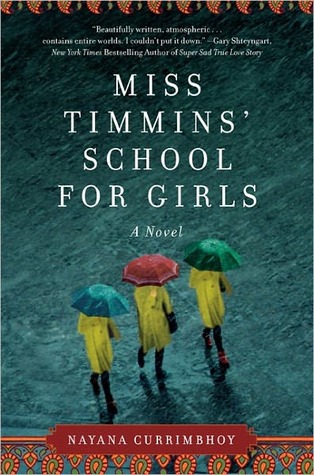 When I started the 24 Hour Readathon, I was partway through Miss Timmins’ School for Girls and intended to put it aside to read something short or easier, but I couldn’t put it aside. It’s a novel centred on a very specific, isolated time and space, which is one of those oddly specific story styles that I love. Miss Timmins’ is intensely atmospheric. The novel takes place during the monsoon season, mostly, and you can feel the claustrophobic restlessness through the story.

In some ways Miss Timmins’ is a mystery story. We know from the first couple pages that a person dies, and we spend most of the book trying to find out how it happens. In the meantime, however, there are sordid love affairs and SO MUCH TRAGEDY. And family secrets.

This is a bisexual book, by the way, not a lesbian one. Both love affairs are poignant, and yes, tragic.

I really enjoyed Miss Timmins’ and recommend it for anyone looking for a “literary” read or for a queer book that isn’t a coming out story.