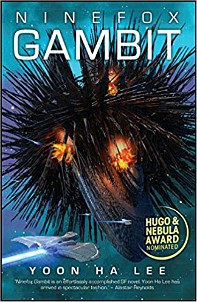 Imagine that you are telling a science fiction story for cavemen, a hundred thousand years ago. Imagine that you’re all sat around a fire, half-covered by an outcropping of stone, hoping that tomorrow will be drier than today, and you decide you’ll tell a story about the far future. Imagine that somehow you have the gift of true sight, and you dream up a simple story about a foiled weekend lunch date in Manhattan. Something simple–two people match on Tinder, but there’s a problem with the subway, and then the taxi driver is a bit of a character but misunderstands where he’s supposed to be taking her, and she ends up walking home from the wrong restaurant, glad that she remembered to throw a pair of flats into her bag.

Where do you start? How do you guide your listener into the setting? Say, when your character has to take that taxi. Do you start by trying to explain an internal combustion engine to your listeners, who have never seen smelted metal? Do you try to describe glass as translucent as water to an audience who has never seen so much as a rough glass bead? How do you describe the setting, miles of skyscrapers and roads teeming with passerby, to someone who has never seen a man-made wall? How would you even begin to describe a smartphone, and then a dating app, to a people who have no written language, and who might only meet twenty or thirty other people their entire lives? How do you explain all this in-narrative, when any character who lives there is so accustomed to everything as to find it invisible, but it is so far beyond the understanding of your listener as to seem like magic? How do you get to actually telling the story, when the underpinnings would take a year to explain?

Yoon Ha Lee, the master who wrote Ninefox Gambit, gets around this dilemma by explaining almost nothing at all. The reader is plunged into the river of narrative facefirst, mercilessly, and had better learn to swim–because the water is picking up speed.

Ninefox Gambit is a piece of military science fiction set in a world whose cultural mores, technology, history, are all beyond our easy understanding. If it is in our own future, this book is set so far ahead as to be unrecognizable. But if the world is as opaque as a river full of silt, still the characters are as sharp as the sunlight off a fishscale. Cheris would be Asian, if she were from Earth; her hair is dark, she uses chopsticks and has a fondness for quick-pickled vegetables with her rice. These things are recognizable, comfortable touchstones for me personally in a book that is full of so much that is alien. If Cheris were a 21st-century American, she’d also be considered a lesbian; her people don’t have a word for it.

(Do you have a word for a woman whose hair is one inch longer than another woman’s? It goes unremarked-upon.)

The universe, or at least the vast number of planets under control of the empire for which Kel Cheris fights, operates under a technology that requires consent to function. Specifically, it is the calendar that requires consent, the sacred days and the unremarkable ones, the hours and the minutes. As long as the people in a system operate under the empire’s calendar, the empire’s technology works there, including its “exotics,” weapons that can fold space, or cause radiation to emit from every entrance (doorways, windows, open mouths, nostrils, pores…), or shatter its victims like cheap candy glass. This agreement is maintained through strict, society-wide adherence to calendar holidays. Not the fun kind where you might get off work early and throw a picnic, but the kind where heretics are tortured in incredibly horrific ways, and everyone gathers around the far-future-television-analogue to witness and to meditate on what they see.

(Miss viewing one of those events, and you risk being the guest of honor at the next one. It is not very difficult to do something which would see you accused of heresy. So the wheels of Empire are greased.)

Captain Kel Cheris does what she is told, largely. She cares about the people under her command, but she understands that when she decided to pledge herself to the Kel, the warrior class, she gave up her life to death, and that all those she commands had done the same.  When she sees a way to maybe win a battle that is just a little bit heretical, she goes for it–and as a result she sees her command stripped from her and her company shattered. To redeem herself, she is given the opportunity to develop a tactic for taking back the Fortress of Scattered Needles, an outpost which has been suborned by heretics. Find a way to do that, she is told, and you may regain your command and keep your life.

The problem is, there’s no straightforward way to do it. The Fortress of Scattered Needles is a nexus with an almost-impenetrable defense, and any empire general hoping to attack it will find that her own weapons will not work, due to the heresy crazing the calendar. There is one who could have done it, when he lived…the Immolation Fox, the mad traitor Shuos Jedao. He was not Kel, but he worked with the Kel; even badly injured, he took the battle of Candle Arc with eight-to-one odds. And then four battles later, he annihilated his own entire fleet, taking his opponents’ fleet with it, and shot all his prized officers in the head. He was executed, and his soul has been kept locked in stasis for the last several centuries, brought out only rarely to win unwinnable battles.

So the strategy that Kel Cheris devises is, wake up the murderer Shuos Jedao, and assign him to me. And he is so assigned–anchored to her body, that is, as a shadow who whispers in her ear and flickers in her mirror. She’s given a rank she has not earned (so that the other Kel, literally programmed to obey commands from superiors, will follow her) and given a small fleet, pointed at the enemy, and set loose. She wants to win, and she wants to survive. But Jedao does not sleep, and for all that he is dead, he is not powerless. Cheris must use his experience and military brilliance without falling prey to either herself–and she grows more and more certain that to make it through this situation, she’s going to need to understand why he did what he did, four hundred years ago.

To say this book is complicated is an understatement. It makes you work for your satisfaction, but it is never plodding or slow, and it does not get weighed down by its own backstory. The battles get ugly, the tortures inflicted on heretics are ghastly. But despite that, there are moments of real beauty, both natural and technological. And maybe more important, the book reinforces, over and over again, that the people on all sides of a battle are people. They have favorite candies and sorts of pickled cabbage, they have hobbies, dislikes, personal traditions. Cheris has a fondness for serialized dramas that anyone who’s ever been in a fandom would recognize. So it is that when Lee writes of a million dead at the battle of Candle Arc, the reader can not help but be reminded that it is not just a number. There is bravery, but not much in the way of machismo; Cheris’s own martial skill is something she is quietly proud of, but she is not given to braggadocio. Being resigned to death is not the same as longing for it; being awake is not the same as being alive. And in a war where the loss of thousands might be a skirmish, it can be difficult to tell who is the more human: one’s commanding officers, or the undead murderer murmuring in one’s own skull.

This is not a piece of traditional, hyper-masculine military SF. While there is loyalty and the love of comrades, patriotism is not held up as a moral ideal–more it is a tool, like a calendrical blade, that can be used against your enemy only in certain terrain. Not even the main character believes that might makes right, but simply that might makes, for a little while, some silence. There is respect for superiors and those more experienced, but there’s also an understanding that there are different forms of corruption, and that the longer one lives, the likelier one is to succumb to them. But this book does share one thing with so many of the others in its genre, and that’s the idea that as long as you can still fight, there is hope.

Content warnings: Torture and other violence (coldly described rather than in a fashion to titillate, but it ranges from one-on-one to starship fleet against fleet, and the weaponry used is sometimes the stuff of nightmare). Sexual assault (again, not explicit). A very great deal of character death.

FINAL SCORE: A rare five out of five stars. Technically and narratively spectacular.