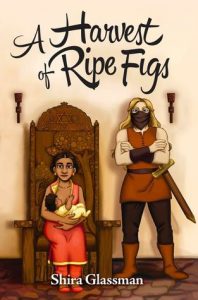 ‘’Not everybody reads encyclopaedias for fun’’

A Harvest of Ripe Figs is the third book in the Mangoverse series. It takes place a bit after the epilogue in the second book. I loved this book so much I binge read it.

This book combines two genres which I love: fantasy and mystery. Shulamit and her family have settled with what happened at the end of  book two . Things are quiet, and indeed, the plot does not revolve much around Shula’s group drama! A violin/fiddle of importance gets stolen (I’m still confused about the difference between a violin and a fiddle!) and Shulamit uses her intellect and deduction skills along with some help from her family to discover what happened to it.

During the mystery, it comes out that Shula is a good interrogator (no torture involved–don’t worry) while Riv stops a lot of bullshit – which I loved. Isaac is smug but helpful and Aviva is supportive and introspective. There is a lot of gender talk and criticism of stereotypes.

I liked the down to business element. For example Riv may be attracted to Isaac but she focuses on her job first. There is no ‘but they couldn’t help themselves’ element.

The accepting diversity is what draws me to this series and in this book, there is very minor ace representation (like blink and you miss it; but I appreciated that it was there).

There is also young trans representation! Aviva sums it up perfectly ”That’s the boy who exists. Anything else is a story” and although Shula doesn’t get it at first, she is very protective of her people. Indeed, she’s a great leadership example (despite it being not a democracy). Shula has plans for giving more females more power in her city. She’s ok with sharing power.

Another thing that was super squee worthy for me was the mention of pests and tropical plants. At the moment, I’m working on a campaign for fair and sustainable tropical fruit (make fruit fair) so it’s something that I became familiar with. The pests are a real problem to our food security and farmers’ livelihoods and Shula really cares about her farmers – the backbone of Perach.

The word ‘Feminism’ is actually used! Women supporting women is also another feature of the book. There was lots of body positivity – especially surrounding maternity and different sizes.

There’s also an example of a toxic relationship and an entitled ‘nice guy’ who wants to be the center of attention and expects things for his ‘sacrifices’. This is dealt with rather than ignored or condoned.

Apart from all the simply narrated but complex topics, it’s simply a fun read. There are some funny elements like the stories about Riv – which turn out pretty helpful in the end.

For me, a good mystery isn’t necessarily complex but it must be clean and rounded-up. Things that were mentioned throughout find their use in the conclusion to the mystery and so for me, while predictable it’s a good mystery.

There were many metaphors also about ripening and maturing – people developing and becoming more themselves. Of course, much food talk as well which I came to expect from this series.

What I wanted to see was Kaveh and his companion again (see I even forgot his name). They were mentioned but in passing. Would have been good if they visited or had visible correspondence at least; considering that they are family.

All in all, it’s a fun read. Fluffy-ish fantasy without too much drama. The pages just seemed to scroll by. I was already used to the world and the characters and it was an enjoyable and fun read. While it may seem an easy read, it still points critically to problems in our society and speaks about different issues.