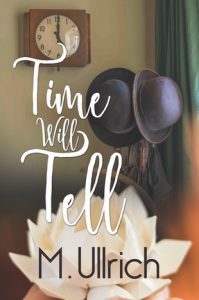 Through Netgalley sometimes we find really good reads! I did not know what to expect. I half chose this book because of its cover, but it was fantastic!

If you could undo the past and start anew, would you?

Time Will Tell follows Eva and Casey. As time plays a crucial role in the plot, we get to see different times; the plot isn’t linear but still easy to follow. Whilst time traveling plays an important role, the discovery and dilemma only arise towards the end.

Eva is an aspiring writer living with her abusive uncle. Casey is her best friend, the star student and whose family is Eva’s refuge. Casey is a popular kid but she prioritizes Eva…until Eva runs away, leaving Casey with a multitude of issues.

Luke is a prime asshole which you cannot help but hate, and you don’t even feel guilty about it. From the synopsis the reader knows that he’ll die – that’s what you’ll look forward to. His behaviour towards Eva is truly disturbing and tragic because this sort of abuse happens one too often in real life.

Eva and Casey are really sweet together. We get to see both their point of views and they are both crushing on the other big time. There is also so much banter. For their first kiss, there was no build up, which I think subverted a common trope.

The McCellans, Casey’s parents, are great people. They also are rooting for the two to get together. It was really sweet. Parents that stand up to bullying are great! They were also a balance for Luke.

Their sexualities, while discussed casually, are not the major point! The major conflict happens after a time jump. At 23 and 24, Eva and Casey have major issues. Casey has spent years worried. Eva has formed another social group and changed a lot. The characters seem to switch personalities, which I think considering the context and their background, was quite realistic. They are not sure whether they fit with each other, after all this time and all these changes.

The lead up to sex was seamless and it was hot (this coming from a person that skims over if it’s not written well and believable). In my opinion, there were a bit too many sex scenes/intimate scenes, but I guess this could be explain by the characters having a lot of making up to do and not wanting to be away from each other.

The conflicts and issues are real, despite the time machine and sci-fi elements. The time machine was not even a major plot point until the end, although it did affect their lives from before. I was expecting the time machine to be discovered earlier, but instead, we get to see Eva and Casey growing up and getting to know them. I liked this.

I recommend this to people that like sci-fi in moderation and people that want to see character development and conflict.