I read most of SuperMutant Magic Academy when it come out in webcomic form, but I’d heard that the collected version added content to make it into a more continuous story, and it had been a while since I first read the comics. The comics themselves are just how I remember them: irreverent, funny, and just a little bit sad.

SuperMutant Magic Academy takes place at a boarding school for disaffected, superpowered teens. The stories are more high school drama than superhero comic, though. My favourite character is Frances, a guerilla artist who relishes in disturbing the comfortable and is only ever shaken by one panel where a teacher coolly observes that her art is “a little 70s”.

Although a few pages were added to give the thread of a narrative, these are mostly disconnected, featuring a large cast (including Everlasting Boy, who attempts to come to grips with immortality throughout all of time). Each page is great in itself, but they don’t really flow together, and I did find it a little tiring as a reading experience when I read big chunks at a time.

The plot that does exist surrounds Marsha, a sarcastic, often apathetic psychic student, and her best friend Wendy, a fox girl who she has hopelessly fallen for. Marsha is closeted and debates about whether to tell Wendy about her feelings. Marsha is acts superior about Wendy’s naiveté and optimism, often criticizing her about it, despite the fact that those are clearly the traits that made her fall in love with Wendy.

This isn’t a romance, and Marsha and Wendy’s friendship doesn’t take up a lot of room in the book, but it is at the heart of it. There might be a lot of supernatural elements in the story, but the experiences and characters are heart-achingly realistic–Marsha most of all.

I think that I preferred SuperMutant Magic Academy as a webcomic just because I absorbed it better page by page instead of binge reading, but I’m glad I got to read the extra content. If you’ve got a bit of a pessimistic sense of humor, you’ll love this one. 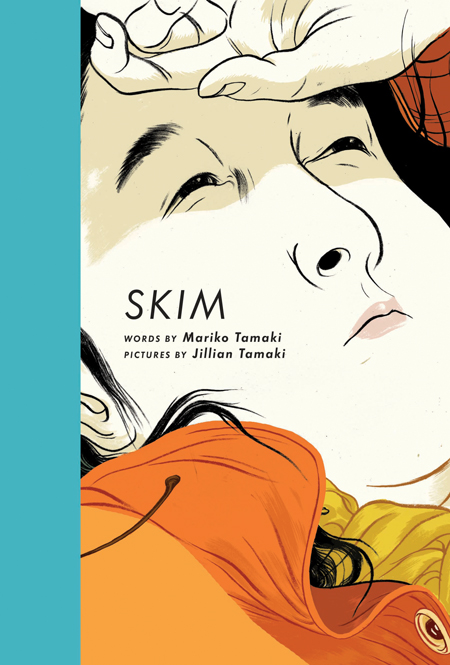 When the graphic novel Skim opens, its lesbian teen protagonist, Kimberly Keiko Cameron (aka Skim), has just broken her arm on her mother’s candelabra that she was using for her Wicca altar. The broken arm isn’t really an issue except when Skim tries to photograph her cast with her left hand or writing her name. Plus, it gets her out of physical education.

After the suicide of a local teen boy from another school, the students and faculty at Skim’s school become hyper-aware of the students’ happiness (or, rather, their potential to commit suicide). Multiple classmates and adults approach Skim in particular because she is a quiet, goth-esque teenager—supposedly a stereotype for at-risk youth. Everyone seems to be worried about her well being, except for Skim that is.

Told in part diary format, part inner monologue, the Tamaki cousins link snippets of Skim’s days and weeks, highlighting conversations with her best friend Lisa, her attempts at witchcraft, the girls at school and her curious relationship with her English teacher, Ms. Archer. Skim’s storyline also parallels Katie Matthew’s, the ex-girlfriend of John Reddear, through Skim’s observations and interactions with her.

The illustrations are done in black and white and mainly focus on the characters’ emotions. Skim’s diary pages can be anything from a half a page to a double page spread, coupling sparse illustrations with minimal text. Both angles of the story telling reinforce Skim’s character: when she speaks, it matters, and she is still a teenager with big, teenager feelings.

What I appreciated most about this graphic novel was its gentle portrayal of Skim. While various characters try to figure out what is going on with her—why she is quiet, upset or aloof, etc.—Skim is just being Skim, reserved, relatively free of drama, and experiencing her own kind of heartbreak. She is true to herself, and in doing so she has the capacity to hear someone else’s heartbreak— and that results in an unlikely but pleasant connection. Overall, a tender portrait of first loves, school friendships, and the importance of compassion.