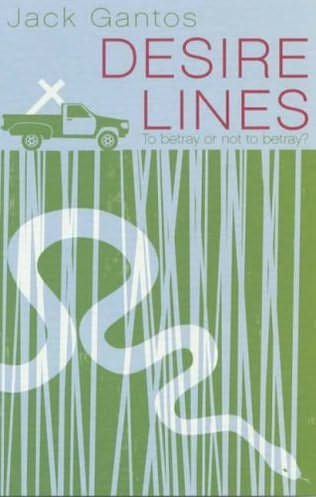 Desire Lines is a slim little outlier volume from Jack Gantos. He’s known for his Joey Pigza middle-grade novels and his quasi-autobiographical middle-to-teen novels, and even for his early readers starring Rotten Ralph. Desire Lines falls into the Lesser-Known Gantos bucket, which also includes Love Curse of the Rumbaughs, which is to Jack Gantos as Tideland is to Terry Gilliam. Having been unsettled by the Rumbaughs, I was apprehensive about Desire Lines, but it’s a straightforward endeavor. Powerful, but straightforward.

Walker is a high school student in Florida, kind of a loner. His personal sanctuary is a local golf course, and it has been invaded by two of his classmates, who are using the place to carry on an affair. And…they’re two female classmates. So he keeps their secret. And he shows up to watch on a regular basis, convincing himself that doing so is justifiable. He’s being respectful, and all.

Enter the preacher’s kid from the new church in town. Okay: If you have not grown up in Florida, you may not be familiar with the Bible Belt mindset that permeates much of its culture. Florida itself has a sizeable streak of weird that Gantos picks up on, but the worst parts of Florida are concentrated in this character, whose sole purpose is to conduct a witch hunt, and then move on to the next town. And Walker, who is generally a live-and-let-live (especially-if-I-can-watch) kind of guy, is somehow targeted. Do we see where this is going? There are no happy endings, there are no easy outs.

Walker falls in with a group of boys who are just awful humans, and they’re not painted as anything out of the ordinary. The classmates having the affair, Karen and Jennifer, aren’t particularly saintly or kind. They’re just high school kids. They behave thoughtlessly and speak cruelly and act selfishly. And when Walker has to make difficult decisions, under significant peer pressure, he uses the girls’ absolutely normal high school behavior to justify his ultimate choice.

The paperback I have was published in 2006, but this book’s original copyright was 1997. I would not be excited about being an out lesbian in Florida in 2015, never mind 2006, never mind 1997. As a Gantos fan, I was interested to read this book because I had no idea he’d written anything with any gay content. Walker’s clear self-analysis was not a surprise, and neither was the ugly, real and human behavior of the other boys. There really aren’t any female characters other than Karen and Jennifer. They aren’t even particularly well-developed characters. That’s not the point. It’s not about them. The book is a streamlined morality tale, a painful study of human behavior as it cuts across the ages, and it’s well done. Homosexuality is used here as a plot device only to denote Otherness and to set up a moral dilemma which can’t end without tragedy. Recommended for Gantos fans, those teaching middle-grade novels, and anyone interested in reading about how slightly introspective teenage boys navigate the development of morality. So—limited audience. But those who try it will find it a quick read that won’t be quickly forgotten.