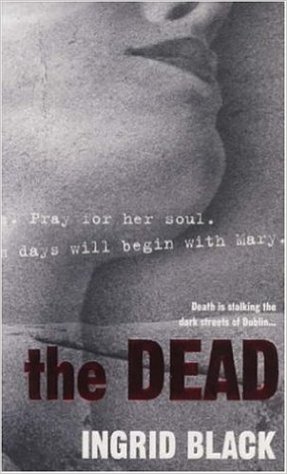 In a 2013 interview, Anne Laughlin lists Ingrid Black as one of her favorite lesbian mystery writers. It isn’t clear from the interview whether she was aware that “Ingrid Black” is actually two writers—Ellis O’Hanlon and her husband Ian McConnel. Nor is it mentioned whether she was aware that O’Hanlon, a journalist, has written flippant comments about people identifying as transgender.

But having gotten that out of the way, The Dead is a right good serial-killer mystery. Saxon, the main character, writes books on true crime. Like Shiloh in Paulette Callen’s excellent Command of Silence, Saxon has only one name, but this doesn’t seem to hinder her greatly. After all, her significant other—Grace Fitzgerald—is Detective Chief Inspector of the Dublin Police, so Saxon can get away with a lot.

The story begins when a man calling himself Ed Fagan begins murdering young prostitutes and leaving religiously themed notes at the scene of the crime. Trouble is, Saxon knows for a fact that Fagan has been dead for years. In fact, she knew the man well enough to begin writing a book about him. So with the help of two profilers, a medical examiner, and of course her S.O. Grace, she decides to hunt for the killer’s real identity before he kills too many more people.

But maybe it’s me that’s being flippant, because, despite what seems to be a same-old, been-there-done-that plot, The Dead is a wet, cold, and dark investigation. Saxon herself has been numbed by her proximity to death and death dealers. Her point of view is a depressing, introspective, quasi-philosophical one. This is how she describes a crime scene, for instance: “A place where there had been such pain and terror was always afterwards so quiet, and yet it would never be entirely free of its past. Bad things lingered, and it turned those places bad in turn, so that other bad things happened in turn.” This is not light reading and the novel sometimes seems to have as many twists and turns as Dublin has dark alleys.

The writing itself is very good and O’Hanlon and McConnel’s voices blend so perfectly that Anne Laughlin (or any other reader) can be forgiven for not suspecting a collaboration. I hope she can forgive me if I am wrong about suspecting that she patterned the unfortunate ending of her first book, Veritas, on this one. On the other hand, the ending of The Dead is first rate.

Downsides? Well, Saxon doesn’t sound much like the American she is supposed to be–and even less like a Bostonian. She knows that baseball teams field nine players, but most of her expressions are Irish or British. Too, there is no sense of lesbian community here; Saxon’s relationship with Grace could just as easily have been with a man—and vice versa. There is no sex, no romance, not even much touching. It makes me wonder why the authors chose to call either Saxon or Grace a lesbian. Since neither author has evidently had much experience in being a lesbian, why not identify their characters as straight—especially if they are going to act the part?

Despite this, I would give this book close to 4 stars, and I look forward to reading the next book in the series, hoping they fix the weaknesses in this one.