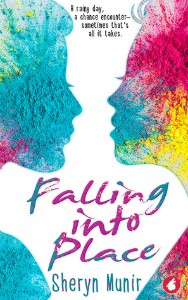 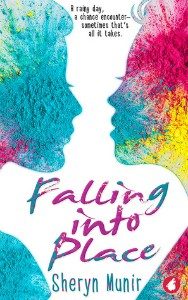 When my friend Shira Glassman was asked to review this book for The Lesbrary, she immediately thought of me, thinking that an own voices review would serve the review reading community better. While I may not be the perfect person to review this book, Falling into Place is one of the rare books I read through and enjoyed with no frustration about cultural inaccuracies, largely in part to the authors Indian heritage and her living in India. Sheryn Munir grew up and currently lives in Dehli, so her ability to write authentically about her own culture is unparalleled. But beyond that, is this book any good?

When Sameen barges into Tara’s cab on the way home to her boyfriend’s birthday party, she has no idea that their second run in will turn into something more. Tara, a journalist living with her mother, is resisting a marriage arrangement her mother is prodding her toward, and Sameen, a commissioning editor living with boyfriend Rohan, is wrestling with her draw to Tara. When the meet cute of jumping into another woman’s cab turns into regular carpooling, that’s when the story really begins.

Set in Delhi, this book has the familiarity of winters spent in India when I was a child. I grew up here in the states, and immigrated here as a baby, so my brief, fleeting memories of Mumbai are of taxis between my grandmother and aunt’s apartments and eating cheese toast at my grandmother’s country club. My ability to compare this book to real life in India or adult interactions with Indian people is minimal, since the last time I visited India I was eleven.

What I love about this book is how authentic it is. The author doesn’t shy away from simply stating that the characters are getting a specific food and doesn’t feel the need to explain things. What is frustrating about so many books either set in India or featuring Indian-diaspora characters is the author wanting to explain everything to the reader. There are context clues, but for the most part, reading this book felt like being amongst my Indian friends, where I didn’t have to suffer through long descriptions of what exactly a samosa is.

Tara coming out to Sameen and the subsequent romance doesn’t hit the same usual notes of this sort of story. Imagine Me and You comes to mind, in which a married woman falls for the florist at her wedding and subsequently she cheats on her husband with this woman. Rather, Tara and Sameen naturally build up a close, honest friendship, and as Tara grows closer, the more her closeted life plans start to come apart. The last third of this novel does follow the pattern stated above, but genuinely, this novel is different because of how the first two thirds are developed. This book made me feel all of the feelings I could have about a romance, and as one of those stony people who doesn’t cry at much, I did tear up just a tiny bit at the end of this.

I see so much of myself in Tara, vowing to myself in younger years that I would just marry a man for the sake of making my parents happy, or simply refuse to get close to anyone in an effort to just bypass the issue entirely. But that isn’t a way to live a life, and in truth, that’s what Tara learns over the course of this novel.

Ultimately, this is a meet-cute that offers so much more than the average. Are there parts of this book I’d change? Sure. This book skims over large swaths of time, tells instead of shows, and the pacing can be a little odd, but these are blips of imperfection in an otherwise smooth diamond. Go get this book, go read it, and go encourage this writer to write more, because I want more Indian F/F romance, asap.

Mehek Naresh in an Indian-American writer living and working in Florida. She is a graduate of the University of Florida with a B.A. in Political Science. She has previously written for The Rainbow Hub, The Mary Sue, and The Fandomentals. Follow her on Twitter @MehekNaresh. 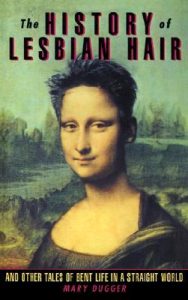