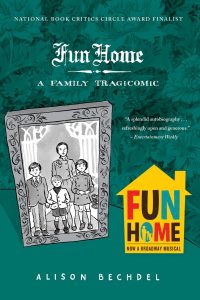 It’s hard to boil this one down. Fun Home: A Family Tragicomic is a complex portrait of a complex family. Let no one tell you that graphic novels cannot be intense reckonings of literature, especially not when they have become staples of the modern lesbian literary canon and have been reproduced as a very successful Tony-award winning Broadway production.

In a very basic sense, Fun Home is an autobiography of the author’s life, from a young tomboy to an out-and-proud lesbian, in the context of her father’s life right up until his maybe suicide, maybe accidental death only a few short months after she came out to her parents and in turn came to learn of her father’s own troubled sexuality. Bechdel paints a portrait of her father as a stern, intellectual figure who was clearly devoted to his family but struggled to reconcile his role within it with his apparent homosexuality. The backdrop of this story is the 1970s (the author recalls passing New York City’s Stonewall Inn as a girl shortly after the infamous riots), a time during which sexual or gender queerness was criminal. We must wonder that if Bechdel’s collegiate sexual awakening was radical, how can we understand her father’s own lifetime of repressed sexuality? This is among the key tensions that Bechdel is trying to work out here.

In Fun Home, her father Bruce is remembered as a high school English teacher and sometimes small-town mortician obsessed with classic literature and 19th century historical preservation. He is defined by his obsessions because, as the author notes, they are the clearest lenses through which she could understand him. Indeed, Bechdel uses an apt metaphor comparing her father to the Greek figure Daedalus and herself to his son Icarus, and wonders: “Was Daedalus really stricken with grief when Icarus fell into the sea? Or just disappointed by the design failure?”

As children become adults, there is a well-known phenomenon of disillusionment which occurs, whereby magical parental authority is stripped away and parents can be understood as the flawed, struggling humans who they actually are. That Bechdel didn’t have the opportunity to reach this stage with her father, who died while she was in college at the age of 44, is an explanation for his almost mythological status here. It’s also evident in the conflicting feelings of resentment and affection that Bechdel’s self-stylized character struggles with throughout the book.

As affectionately as Bechdel illustrates nights playing piano with her father, strutting around in his old suits, and borrowing books from his personal library upon recommendation, readers begin this story by seeing a violent, abusive, and overall terrifying father figure. Family secrets, comic and shameful, feature as important narrative points in this book. Although it is tucked away in the acknowledgements, I think the best summary of this story is this note from Bechdel to her remaining family: “Thanks to Helen, Christian, and John Bechdel for not trying to stop me from writing this book.”

This is not lighthearted reading. The author’s ambivalent narration of events as they are recalled from her often vague childhood journals are riddled with obsessive-compulsive inaccuracies can be jarring. On the scale of tragic versus comic, this life story does seem to lean more one way than another. As stated from the outset though, this is a complex portrait of a complex family. It is full of rich literary references, scenes of a childhood innocence preserved through childish ignorance, and the longing for a familial connection that never achieved its full potential.

For more info on Alison Bechdel and Fun Home, check out this interview she did with The Guardian.