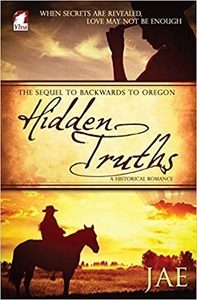 I loved the story of Luke and Nora in Backwards to Oregon by Jae, in which a woman in disguise as a man marries another woman in what starts as a fake relationship to help each other on the long Oregon trial, turns into a romantic, slow burn favorite of mine. You can find my review for that here. Hidden Truths is the sequel set 17 years later and focuses more on Luke and Nora’s eldest daughter Amy and her romance with newcomer to the horse ranch, Rika. Amy has grown up under the love of her parents and given much more freedom than most women in her age. She also feels an attraction to women that she struggles with but is able to keep locked down – that is until she meets Rika. Rika comes to Oregon pretending to be her her dead friend to be a mail order bride to a man who works on the farm. Along with all of that, Luke still hasn’t revealed to her two daughters that she is a woman, despite them both being old enough to keep the secret.

Hidden identity is a theme I love and here it was explored so well. Luke is hiding her gender, Rika is hiding her name and history, and Amy is hiding her sexuality. All of these conflicts and storylines weave together and build off of each other. Each character moves the other forward in their arc and development. Everyone gets a moment to shine, which I’m glad for as I was worried when I saw how big the cast is.

The romance between Amy and Rika was very engaging. I could really believe who they slowly took time to get to know each other, then to trust one another, and then to slowly fall in love. At the same time both are struggling with secrets they have from each other.

However, the romance isn’t the only plot. Luke takes some of his horses to another state to sell them and Amy is left in charge of the ranch. She has to deal with men not wanting to follow her command in an era where women were nothing more than wives.

I also really appreciated the world building and the clear expansive amount of research the author had put in. I love historical fiction and nothing can ruin a story more for me than feeling plots points and character movements are out of place for the era. At the same time, it can be just as damning to have too much exposition on the world and the time period. Jae masterfully weaves in the information with the characters and their stories.

Overall, this was a great read I recommend to anyone who likes historical fiction and/or stories with hidden identity. This is a sequel, but I think it stands very well on its own if you want to start here instead of Backwards to Oregon (but I do highly recommend that one as well).