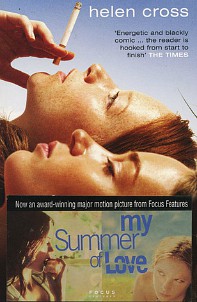 My Summer of Love by Helen Cross was nothing like I expected. This was a library find and knowing that there was a lesbian movie with the same title, I borrowed it. Only, I had no idea what the movie was about and the book blurb didn’t offer many hints as to what was to come.

The plot follows Mona and Tamsin. Mona’s family own a pub, where she works but she also volunteers at the Fakenham’s estate to look after a horse; which is where she meets Tamsin again. Tamsin is back from boarding school and up to no good. This is perfect for Mona, who is interested in crime and gambling her money. Throughout the book, there are many hints that something will happen that summer and indeed, what happens was shocking.

Tamsin and Mona do get together. They love booze, dressing up and drama – lots of drama. What struck me was that what they loved about each other the most was probably the drama. They are inherently toxic for each other, and they know it. Tamsin has a superiority complex. She’s critical and cynical. Mona just wants to leave her family and is very jealous and spiteful. Both are alcoholics. Family relationships are an important aspect of the plot. The plot gets thicker when they live in Tamsin’s house alone for the summer.

While the plot was not what I expected, the writing was great. Some things were executed really well such as the chapters which were all named after a drink or food which was then mentioned in the chapter. If we had to keep in mind the time and place that this book fictionally took place in, the ideas about society and women and the nuclear war (cold war), the ideas presented feel very real. This does not mean that I want to read on how the protagonist thinks that ‘’with a tan and a pair of heavy breasts you need not worry about independence.’’ I am using more quotes than my usual reviews so that you, as potential readers, know what you are signing up for.

The ending was very disturbing, which is why I think this book belongs to the ‘horror’ section. The kind of horrors that are more disturbing because they could happen. This is not a Bury-your-gays book, but the ‘villains’ are queer. I kept hoping for the best and for a while, I thought it would happen but no, it didn’t. Mona and Tamsin liked to power-trip each other and scare each other on the regular.

My thoughts on this book are mixed. On the one hand it was executed half-well. There are still some sub-plots which I feel were left open and not like the main open-end but just left hanging. There was constant mention of one girl that went missing. It’s not explicit what happened to her and I felt like it was a wasted opportunity. Had I known what the book was about, I would have been ready for it, but as it was – I wasn’t. Some words left me perplexed. It took me many chapters to realize that ‘mesen’ meant ‘myself’.

The book offers a lot of introspection and is very depressing. This book has a whole list of trigger warnings. There is a lot of family issues, a lot of body image issues – this book could be very triggering. There’s a lot of body shaming as well and some animal neglect and child neglect. There’s also murder and suicide. There’s a lot of harmful bodily stuff, things that would make medical professionals cringe. There’s a lot of sexism, coming from everywhere, including the protagonists. It does offer a lot of thoughts on women. I particularly liked the message on the bodily fluids. I don’t think it’s something that a lot of writers touch upon and it’s something many people live every day.

In conclusion, while this book is Sapphic, unless you are in the mood for a dark read – don’t read it. Just when I thought there was hope for Mona…there wasn’t. This is the ultimate example of what peer pressure and being caged and  wanting attention and having darkness that is not addressed in a healthy was could lead to. It’s pretty disturbing and I was also not sure if the two protagonists actually loved each other or whether it was a matter of two dark souls meeting and corrupting each other further.