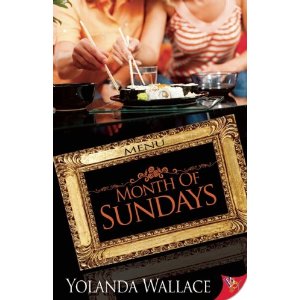 Being somewhat of a foodie myself, a review of Month of Sundays by Yolanda Wallace on Goodreads caught my attention as it mentioned ‘the delicious dishes that Yolanda described’. I soon read the book and sure enough enjoyed the description of the numerous meals the two main characters delight in throughout the novel.

When she realises that her best friends have set her up for a blind date, Rachel is appalled. She certainly does not feel ready for another involvement after an eight-year relationship which ended in a disaster. Besides she finds that famous chef Griffin is totally out of her league.

In fact both women are attracted to each other but neither wants to get involved in a solid relationship, albeit for different reasons. Griffin suggests a Month of Sundays so that they might get to know each other better without rushing things.

‘One date each Sunday for the next…’ She paused while she did the math in her head. Seven and a half months. I get to know you while I peel the onion one layer at a time. I woo you not with my body but with my mind. Something, I have to say, would be a first for me.’

Yolanda Wallace’s book is a yummy and feel good novel and, rather than offer spoilers, I have chosen to interview the author. Thank you Yolanda for your time and availability; it has been a pleasure to interview you.

Yolanda Wallace, can you introduce yourself in a few words?

As I say in my bio, I am not a professional writer, but I play one in my spare time. I am a banker by day and a writer by night. The night shift is much more fun!

As a child and teenager what were the books that made an impression on you?

As a child, my favorite book was Pippi Longstocking. I loved her feistiness and independent spirit. As a teenager, I borrowed my teacher’s copy of Rita Mae Brown’s Rubyfruit Jungle, which introduced me to a world I had only just begun to imagine.

What are your favorite authors today and do you think their writings influence your own?

I don’t have any favorite authors, per se. I read anything that strikes my fancy. When I was younger, I adored Stephen King and I think his style rubbed off on me a bit, but I think (I hope) I have developed my own over the years.

Who are your favorite lesbian authors?

I love the work of all my lesbian contemporaries, especially Radclyffe, Kim Baldwin and Xenia Alexiou! Nothing’s hotter than a sexy lesbian super spy.

Is Month of Sundays your first novel?

–What inspired you to write your first book?

I was inspired to write my first novel In Medias Res by a news article I read while in vacation in Key West, Florida. The article detailed the travails of a man who claimed he had been mugged and had lost his memory. He said he couldn’t remember anything about himself, but he knew he was gay. I wanted to explore what makes a person who they are–how they feel or what they learn.

Would you say that you write lesbian fiction or novels where lesbians are the main characters?

I would say I write novels where lesbians are the main characters. I make sure my characters interact with society as a whole instead of segregating them to one insular community. My way, I suppose, of letting straight readers know our “worlds” aren’t separate and frequently intersect.

Did you know right from the start that you wanted to write this sort of novels?

I have dabbled in writing since I was eight years old and always dreamed of writing my version of the Great American Novel one day. I didn’t know lesbian fiction novels existed until I was 17. When I got to college, I wrote my first short story that featured two female characters. I liked it, but I didn’t think I had enough life experience at that point to tackle my first full-fledged Sapphic novel. That came many years later. Now the ideas won’t stop coming!

How did you conceive the plot for Month of Sundays?

Month of Sundays actually began as a short story that featured an early version of the first chapter and ended at the chapter that takes place on New Year’s Eve. When I finished, the characters wouldn’t stop talking to me and I decided to expand the short story into a novel. I am a major foodie, so the premise of a culinary trip around the world came from one of my personal wish lists.

Did you draw your inspiration for the main characters (i.e. Rachel and Griffin, and to a lesser extent their friends) from real life? Or did you totally invent them?

I drew my inspiration for their surroundings from real life. Rachel’s apartment, for example was owned by friends of mine named Jane and Colleen, who my secondary characters are named after. The characters themselves, however, are products of my imagination. I wanted to feature a character who was a bundle of insecurities as most of us are, so I thought of a character struggling with issues of weight and self-esteem who meets a sexy, confident chef.

Do you have a favourite character in this novel? Which one?

My partner adores Jane because she says Jane is the quintessential best friend who pushes you to do all the things you say you don’t want to do but really do. I’m partial to Griffin because her musical tastes are my own and she’s probably the most well-rounded character I’ve written so far.

How has the novel been welcomed so far?

I have received more positive feedback from this novel than any other. Its themes are universal and appear to have struck a chord with readers. 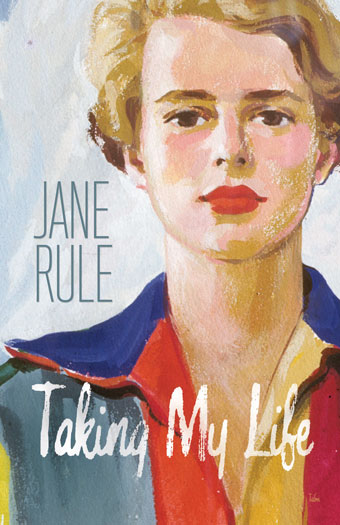 Taking My Life is Jane Rule’s autobiography, yet it was only published posthumously in October 2011.  And it might never have been published, had it not been found by chance by Linda M. Morra, a Canadian academic, in an archive box at the University of British Columbia a year after Rule’s death. Since both a manuscript and a typescript existed, Morra concluded that Taking My Life was intended for publication and proceeded to edit what she had found.

Jane Rule (1931-2007) is probably one of the most significant lesbian writers of the twentieth century and one for whom I have always had a special fondness. In fact her groundbreaking novel Desert of the Heart (1964) is the first lesbian book I read in the early 1980s when I was trying to work out who I was. I fell in love with it and have read it again several times over the years, but I knew next to nothing about Rule as a person, and even less about the child and teenager she had been.

Taking My Life is about growing up in the USA in the 1930s and 1940s–the book covers Rule’s first 21 years of her life–in an impoverished middle-class household, sandwiched between a wild brother and a much younger sister. Her father was a salesman who was often away for work, and thus the children were mainly brought up by their stay-at-home mother, with formidable grandparents in the background. Rule relates family life in detail and she describes the numerous moves in hope of better prospects and how insecure they made her feel.

Taking My Life is about meeting a string of women who were able to see through the clumsy defiant child and adolescent and encouraged her to mature and develop into the honest and strong woman she finally became by believing in her abilities and strengths–Dr. Elizabeth Pope, her English professor at Mills College being the most notable of her mentors.

But Taking My Life is mostly about Rule growing up queer at a time when such things were not mentioned, and gradually coming to the realisation that she “had no taste for men, except as friends”. It is about falling in love with her very married art teacher, Ann Smith, and being in love with her for years. The relationship between young Jane and her older friend is portrayed with frankness: Ann Smith was a complex woman who pressed Rule toward experimenting with men while lending her The Well of Loneliness, approving of same-sex relationships and having a brief fling with her.

‘It wasn’t the first time she’d kissed me on the mouth, but it was the first time I felt the ache in my gut turn to fire. ‘You have to understand,’ she said, holding my face in her hands. ‘We can’t make love. You have to make love first with a man, adjust to that, or you’ll be a lesbian.’

The end of the memoir is devoted to three trips Rule made to England while at Mills.  She first went to Europe to attend a course on Shakespeare in Stratford where she met Roussel Sargeant (whom she first saw on a train and) to whom she felt attracted instantly. The attraction was reciprocal, despite the ten year difference, and a relationship developed. When Rule went back home, they kept in touch. The following summer she crossed the Atlantic to be reunited with Roussel and visit Europe. Although the trip was not as satisfactory as Rule had hoped, she still planned to spend a year in London where she could live with her English lover. The plan materialised and thanks to Rule’s family she was able to finance the year and learn to “live with the baggage of (her) life, its rhythms of failure and rebirth”.

I was expecting to enjoy Taking My Life and was not disappointed. It is an engaging memoir which portrays a detailed side of Jane Rule we do not necessarily perceive in her novels and essays. It is an absorbing and fascinating read and will hopefully rekindle interest in her writings.