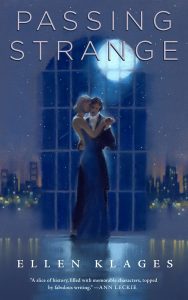 Ellen Klage’s Passing Strange is an award-winning fabulist romance between Haskel, a cover artist for pulp magazines, and Emily, a singer in a lesbian bar, set in San Francisco during the 1939-1940 World Fair.

It’s a beautiful, weird little story, with just a tiny touch of magic, that revolves around a friendship group of queer women. I don’t know if I’ve mentioned it here before, but I adore narratives about queer communities, especially when they show the importance of queer friendship groups (rather than focusing on one isolated couple who never talk to any other queer people), and Passing Strange does that! It has different varieties of queer women – queer women of colour and queer white women, queer women who are married to men and queer women who are openly living together – it shows so many different ways to be queer, and I loved it for doing that. I especially enjoyed the way that that characters reacted to Mona’s – there was a really fascinating touching-on of performative queerness as equal parts freedom and prison; the people who worked at or visited Mona’s had a space where they could be openly queer, but the price of that was also being a tourist attraction for straight couples to gawk at. The depiction of communities helping each other cope with oppression, and queer people building their own families together, is great and so welcome.

I have seen some complaints that there isn’t very much of the fantasy element in the book, and it’s definitely fair; Franny is introduced as having magic very early on, and that is almost the only reference to magic until the last quarter of the book. However, I really liked the magic that we did get! It’s presented very matter-of-factly, like of course a woman could fold a map to connect two different parts of San Francisco together, why wouldn’t she be able to do that? She’s interested in studying it scientifically, but of course it’s a thing she can do. The ordinary magic of the World Fair, or of the city waking up for the night, is presented as just as magical! That’s wonderful to me.

The writing is lovely too. I found the narrative tone to be perhaps a little distant, but I thought it worked for the story it was telling and the time period it was set in – it fits the tone of lesbian pulps that I’ve read. It does shift point of view in the middle of scenes, by the way, but it doesn’t feel like head-hopping to me; it feels like the camera trick of soap operas, where someone finishes their scene and leaves, leaving the camera behind focused on someone else. I feel the style and techniques work very well for what it’s doing. And the romance! It’s a romance about the parts of someone that surprised you, because Haskel and Emily don’t quite get along on their first meeting, but watching them surprise each other and move from that awkwardness warmed my heart. However, the relationship moves very quickly – but the characters seem to be as surprised by it as I was, which make me feel better about it, and considering the events of the novel (including an abusive ex-husband coming back), I could absolutely buy the relationship moving faster in response.

My attitude to the historical aspects is mixed; one the one hand, I love the little historical details it wove in, and quite frankly drawing on pulp media is how you get me. But I have this bone-deep instinctive side-eye for any narrative where famous, real, historical people are introduced, especially if one of the main characters has slept with them. On the other hand, I really appreciated that it did go so hard into the details of the time, because it worked. It’s fascinating and detailed and really brought the story to life. (There is a fair amount of historical sexism, homophobia, and racism, so fair warning! The latter is deliberately used as a way to get money out of white people, but it’s still worth warning about.)

The ending was bittersweet even as it made me smile – it resolved remarkably little about Haskel and Emily, but the way the story reveals the significance of Helen’s actions in her framing story more than made up for it. Passing Strange was so lovely and dear to me, and I highly recommend it. Please read it and come back to be excited with me!