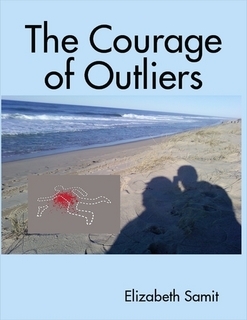 The Courage of Outliers by Elizabeth Samit is a collection of ten mystery short stories, all with some gay or lesbian content, usually with a lesbian protagonist. I don’t read a lot of mysteries: I tend to be terrible at spotting clues, and usually I end up not only surprised but confused by the big reveal. This is the first collection of mystery short stories that I read, so I can’t claim to be familiar with the genre. I found it to be a very different experience that a full-length mystery, because there isn’t really any space to subtly drop clues and misleads. I felt like it was impossible to figure out the culprit more than a paragraph or two before the protagonist because of this. As a result, it didn’t have that mystery feel to me, because it was less a puzzle to solve, and more of a traditional narrative, but one that features a crime. I also felt like so much information and so many characters had to be packed into a story to fulfill the mystery element that I began to find it difficult to keep track of names, though that could just be my own bad memory.

I definitely think that the biggest strength of this collection is the characters. Samit is great at quickly establishing a character’s personality in each short story, and they feel very believable and interesting. There is also a big variety of protagonists between the stories, of different ages, sexualities, races, and backgrounds. Most of the protagonists were people I wish I could spend more time with, and even though they only lasted a dozen pages or so, their lives seemed to be fully imagined.

Unfortunately, I did also have some issues with the collection. Although the characterization was strong, personally I found most of the plots not very compelling. This could be because I’m not a big mystery reader, but again, I felt like it was missing that slow reveal of clues that I relate to mysteries. Most of the time, I just wasn’t very invested in the solution to the murder, because the victims weren’t characters that I knew or cared about, and the circumstances weren’t puzzling enough to make me compelled to find out how it was done. I also did find the writing a little clunky at times, including the odd use of quotations around words that I would consider pretty well established, like ‘ex-girlfriend’ or a police ‘statement’. Although the main characters were believable, sometimes the characterization of minor characters seemed rushed, such as with this description: “Raised in a tough South Boston neighborhood, Officer Valerie Hawkins–whose daughter had committed suicide–had been briefly assigned to assist another officer in the new cyber-crimes section.” That’s a pretty big aside. Another sentence that made me do a double take: “That night, it was on the eleven o’clock News that Mercedes Vega, the ex-wife of Paul Farnsworth and former piano teacher, had been discovered robbed and fatally attacked by her daughter.” To clarify, she was discovered by her daughter, not attacked by her daughter.

There were also some questionable moments in the stories, such as the word “transvestite” being used without context, and a (non-Romani) main character describing herself as a “gypsy” because she travels a lot. One story mentions, again without any more context, that a woman has an affair with a “married man whose wife was disabled.” Also, one story involves the murder of babies born with disabilities, and another has a child with disabilities who is (or was) very violent. Combined, those don’t make for the best representation of people with disabilities. Though, there is also one protagonist who was in a psychiatric ward. Those were moments that made me uncomfortable, especially since this collection does seem to be actively trying to be diverse.

As you can tell, I was a little conflicted on this one. I would still recommend it if you are a fan of mystery/crime short stories, especially with queer characters, but there are definitely some flaws as well.