I’m sorry that I haven’t been updating as much this week. I’m taking some pretty intense courses for the next month and a half (Economics?!), so I’ll probably only be posting once or twice a week. Please send in some guest reviews if you’d like to see the Lesbrary update more! 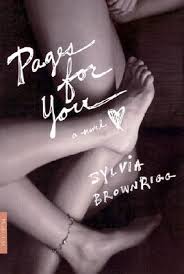 I have gotten a pile of books in the mail this past week and a half, but I’ll start with one I’ve already mentioned: Pages for You by Sylvia Brownrigg. This book was on the General Recommendations post, but I just bought a new copy; the first time I read it, I got it from the library. I’ve told you why I liked it, but here’s what it’s about: Pages for You follows the narrator, a 17-year-old woman, who falls in love with a teaching assistant 11 years older than her. The title refers to the narrator’s question, “What would happen if I wrote some pages for you? Each day a page…” If you’re wondering why I’m including a book I’ve already read and mentioned on the Lesbrary in a Sneak Peek, it’s because I plan to re-read it and give it its own review at some point (as with all the lesbian books I’ve read but haven’t reviewed).

I got two others about a week ago through Bookmooch. The first is Stage Fright by Ellen Hart. It’s book three in the Jane Lawless mystery series, but I’m hoping that won’t matter. This book involves investigating a murder of an actor at a theater. A description of the book says she has an “uninhibited crony” named Cordelia who helps her. I’ve still never read a lesbian mystery, though I have access to them, but I’m excited about starting!

The next book I got was, embarrassingly, a repeat. It’s called Watchtower by Elizabeth A. Lynn, and it’s book one of the Chronicles of Tornor. I guess I didn’t take it off my wishlist on Bookmooch the first time I got it, so I mooched it again, and now I have a big hardcover ex-library copy and a little slightly beat-up paperback copy. Which do you think I should keep? Watchtower is a fantasy novel about a prince defending a kingdom, but it’s also supposed to have quite a few gay and lesbian characters, both as main characters and as background characters. This seems to have gotten a lot of mixed reviews, so I’m curious to see what it’s like.

Have you read Pages for You, the Jane Lawless series, or the Chronicles of Tornor? What did you think of it/them?