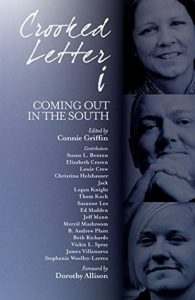 The 2015 non-fiction collection Crooked Letter i: Coming Out in the South edited by Connie Griffin is interesting and moving but sadly not very diverse. The book focuses on the coming out experiences of Southern lesbian, queer-identified, gay, and transgender people. The book’s unique title is inherently Southern. It comes from the chant that young Southerners use to spell Mississippi. These sixteen first-person essays chronicle experiences which range from both mundane and extraordinary to hopeful and devastating. These deeply personal narratives examine first love, gender identity and performance, homophobia, finally learning the language to describe themselves, belonging, and death.

The collection includes several noteworthy stories from lesbian perspectives. Stephanie Woolley-Larrea’s “Straight as Florida’s Turnpike” is an interesting and well-written narrative which recounts the author’s exploration of her identity and her journey to become a mother. She also recalls her search for a community and a sense of belonging. Woolley-Larrea’s relatable journey to understand her identity and sexuality even includes her unsuccessful attempts to adopt different lesbian personalities including ‘Nature Lesbian’ and ‘Activist Lesbian.’ In an endearing touch, the narrative includes the author’s conversation about marriage with her young triplets.

Susan L. Benton’s “The Other Side of the Net” is a unique and inspirational essay. She details her life as a sorority girl which is at first fulfilling and happy because she finally feels that she belongs. She even has a secret romance with a fellow sorority sister. However, Benton is soon outed and kicked out of her sorority. Despite these devastating setbacks, she emerges victorious in academia and on the sports field as she triumphs over her former sorority sisters in an important college volleyball match.

Another notable essay is Merril Mushroom’s informative and disturbing “The Gay Kids and the Johns Committee” which highlights the horrors experienced by lesbians and gay men in South Florida. She carefully captures the fear and hysteria during the late 1950s as she recalls how gay people were hounded. Mushroom recounts newspapers gleefully outing people and publicly revealing their personal information. The author deftly combines historical events with personal memories of the era as she also recollects her experiences of surviving during this dangerous time. She even briefly pretends to be straight to escape a detective who was seeking to expose gay people. She also remembers police officers harassing and arresting people at gay clubs and the gay beach. Mushroom’s essay is an unforgettable and important read. Although the incidents are horrifying, it is vital that readers learn about these tragedies and injustices.

While I did enjoy many of the narratives in this collection, I was extremely disappointed with the lack of narratives from people of colour. Although the book’s editor, Connie Griffin, briefly acknowledges the collection’s glaring lack of diversity, she does not really address it. While the essays do encompass a variety of experiences and readers of different backgrounds and sexualities may find elements to relate to, this collection is overwhelmingly white. Therefore, it misses the abundant opportunities to explore the rich intersections of sexuality, race and gender.

“Ben’s Eyes” by Louie Crew is the only piece which represents a gay African-American’s experience. This engaging and well-detailed narrative follows young Ernest Clay as he discovers his sexuality with his older cousin, Ben while at his grandmother’s house in Georgia. The essay provides an invaluable look into the lives of African-American people in the South. It also examines strong family dynamics and debunks negative stereotypes of Southern African-American people, especially with regards to homosexuality. However, this piece is written by a white man. Although Crew is Clay’s husband and the essay is sensitively written, it is sad that this collection’s only representation of black people has been presented to readers by a white man.

James Villanueva’s “The Gathering” is another notable essay which is well-crafted and intensely moving. The narrative focuses on a family party for a gay man who is dying of AIDS. Villanueva also recalls his own coming out journey and he examines the complexities of family, death, and identity. His interactions with his family and especially with his sick Tío Jacob are touching and optimistic. Villanueva’s piece is a little lengthy but it is not noticeable because his story is so rich and fascinating. The essay’s inclusion of aspects of the author’s Mexican culture is a welcome addition as it provides some much-needed variety in this collection.

Crooked Letter i: Coming Out in the South contains many original narratives which are poignant and eloquently written. While these essays do not hesitate to recall the loneliness and pain associated with being different and coming out, there are instances of optimism, love and acceptance. However, the book is not a casual or easy read. The essays are lengthy and quite dense because they confront heavy themes like death, identity, and religion. There are also instances of homophobia and violence so readers sensitive to these issues should be vigilant. While I did enjoy the collection, the lack of representation of and from people of colour was disturbing. The book claims to represent a cross-section of Southerners but the narratives are almost exclusively white. I would have liked to see a variety of experiences and voices.