Part of the idea behind selecting summer reads is vacationing from our jobs, whatever they may be. I’ve already taken my longer vacation, tramping up and down the streets of San Francisco. Now, I squeeze in the odd long weekend here and there, scouring stacks of unread books for the one (or two…or five) that will share the quiet moments with me before bed or as I lounge on the back porch of a cabin rental, surrounded by trees and birdsong. Recently, I stole away into the mountains bordering Canada and Washington State. I managed to pack *only* three reads: Vital Lies by Ellen Hart, Wade in the Water by current United States Poet Laureate Tracy K. Smith, and a back issue of Analog Science Fiction & Fact magazine. 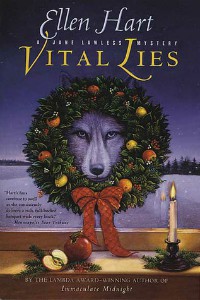 Vital Lies, Hart’s second cozy mystery featuring amateur sleuth and restaurateur Jane Lawless, takes places as far away from sunshine and beaches as you can get. However, if you’re plastered to your couch in a tank top and short pants, a Minnesota winter might be just what you need to cool down. Jane and her best friend, the inimitable, Cordelia, spend the Christmas holiday visiting a friend with a rural inn. It is immediately apparent that someone is trying to sabotage its success, as disturbing incidents occur. On top of it all, Jane must decide whether she wants her English aunt Beryl to come live with her. I read this one out of series order, but I’m glad I chose it for a restive, secluded woodsy weekend. Hart has a great talent for placing readers within the scene, whether it’s among snow drifts, onstage, or at a college sorority house. 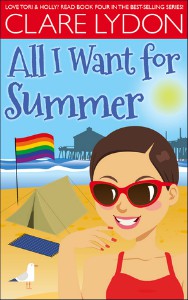 All I Want for Summer by Clare Lydon, the fourth book in her “All I Want” series finds London-based Tori and Holly heading to Brighton Pride to help promote their friends’ lesbian dating app. I downloaded the novella on the 4th of July, eager for a distraction from the incessant booming and crackling of neighborhood fireworks. The women, who are challenging themselves to break out of their comfort zones, end up in involved in a series of misadventures. Holly, however, is a reluctant camper and Pride attendee (for painful reasons that end up playing a role in her holiday trip). Through it all, Tori possesses a sense of determined optimism that no amount of shenanigans can derail. A surprise ending might entice me to pick up the next book in the series, All I Want for Autumn. While I haven’t read the rest of the series, it didn’t prevent me from enjoying the novella as a stand-alone. Lydon, who also hosts a fantastic interview podcast called The Lesbian Book Club, sets up character chemistry and offers a peek at Pride at the English seaside that’s a mix of humor and drama. Once Upon a Caravan is another light, quick read from Lydon that also involves trying new things over a holiday.