Didn’t Stay in Vegas is a lighthearted romantic comedy about two best friends who wake up after a wild night in Las Vegas, and discover that they’re married. To each other.

Callyn’s life is a bit of a mess, but her best friend Emma is always there to bake her cookies and marathon TV shows.  So when Callyn has a terrible hangover and underwear full of glitter the morning after their mutual friend’s bachelorette party, she immediately looks for steady, reliable Emma—only to discover her in a similar state, holding a marriage certificate. Emma claims she doesn’t remember the wedding, but she also suggests they stay married for financial reasons that feel like a stretch. After a string of life setbacks, Calyyn ends up moving in with Emma, getting a puppy, and being extremely adorable while spending most of their time nesting together. Even clueless Callyn starts to wonder if Emma’s been in love with her all along.

Didn’t Stay in Vegas is a low-conflict romance, perfect for when you want the book equivalent of a cup of sweet hot chocolate. As a reader, it was fairly obvious early on  that Emma is into Callyn, so most of the book is just watching Callyn slowly figure out her own feelings, while getting her life together along the way. I liked that Callyn and Emma are both comfortably queer before their marriage. This is a friends to lovers romance, not a coming out story. And accidentally falling in the love with your friend is certainly something queer women are good at!

Of the two main characters, I found Emma’s kindness and competence more enjoyable than Callyn’s frenetic energy. But this story is told from Callyn’s point of view, so we can only guess at what Emma is feeling. This leads to many hilarious moments, because Callyn is incredibly slow about noticing that her BFF is definitely in love with her. Callyn’s denial persists even after they have sex!

Still, I was left feeling like Emma’s character was a little flat, and we don’t really learn much about her outside of the relationship. Since Callyn feels younger and less comfortable in her skin, reading the story from her point of view sometimes made the relationship feel immature.

I did enjoy the theme of chosen family. Callyn and Emma’s big queer friend group felt like extras on L Word Generation Q—attractive, vaguely interesting people that I found myself more interested in than the main characters.

Didn’t Stay in Vegas lacks the emotional substance of Cameron’s other romances, but it’s a frequently funny, comforting, easy read.

I think this book is going to be chocolate cream pie for readers who are suckers for friends-to-lovers f/f.

Who We Could Be by Chelsea Cameron is pitched as (grown) Anne/Diana from the beloved Anne of Green Gables series. Cameron has definitely captured the magic of the conventional girl (Diana, or “Monty” in this book — Montgomery, possibly as a nod to the inspiration’s author) dragged eagerly into the creative, spontaneous, and unconventional schemes and adventures of her red-haired best friend (Anne, or “Tess” in this book.)

We’ve moved about 300 miles west from Prince Edward Island to Maine, and 150 years forward into the present day, but Cameron preserved the general part of the world, the small-town feel, and most importantly, the dynamic of the original relationship. As mentioned above, Tess has the imagination, quirks, and impulsiveness of a Manic Pixie Dream Girl, or the original Anne Shirley. In addition, the initial best friend relationship between the two leads has that intense obsessive feel that causes some readers to long for Anne/Diana in the first place.

Let’s put it this way: there are characters in this book who are basically waiting for Tess and Monty to realize they’re in love with each other, because they kind of act like they already are, way before it happens. For one thing, when Monty’s engagement goes up in smoke, Tess goes on the honeymoon with her instead. Which is in Savannah, Georgia, by the way, if you want to vicariously enjoy it with them. Actually, to be frank about that, there are degrees of this intensity that felt a little smothery to me, but I’m going to be aboveboard and admit that I’ve got specific, personal experiences that color my thoughts here. And not every fictional relationship is going to be 100% perfect for every reader.

Another pleasant and unexpected deviation from the original canon: first of all, Tess, unlike Anne, is not an orphan. She’s part of a large, noisy family (that includes a trans lesbian aunt and her wife, who is also trans!) This is a fun wish fulfillment that I feel the original Anne would be touched to know about. By the end of the book, it has really leaned into the well-noted phenomenon of friend groups who all eventually come out because of the way we find each other before we’re even out to ourselves.

The sex scene toward the end of the book is hot and satisfying. And it’s a really slow burn because both girls start the book thinking they’re straight so it’s good to have a well-written payoff after all that.

I want to leave a warning on this book, by the way, that will only be relevant to a few readers but for those readers it will matter. Many of the supporting female characters in this book (although not the two leads) are either pregnant or in the process of arranging motherhood some other way. If you would rather avoid that, perhaps wait on picking up this title.

Shira Glassman is the author of fluffy, feel-good f/f fiction such as Knit One Girl Two about an indie dyer and the wildlife painter who inspires her next round of sock club, or Fearless, about a band mom who’s swept off her feet by the music teacher. 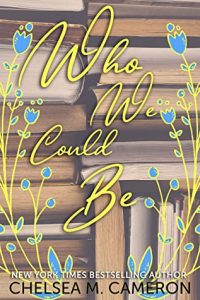 Who We Could Be is a fluffy, heartwarming romance about supposedly straight best friends who fall in love with each other. The story loosely reimagines two of my favorite characters, Anne Shirley and Diana Barry from Anne of Green Gables. I sometimes find coming out stories too predictable and trite. I loved this gooey, angst free story anyway, and recommend it for when you need an inclusive, low-conflict read.

Tessa is a quiet, nurturing, librarian who falls asleep most nights while giggling over the phone with her best friend Monty. She’s engaged to be married to a guy no one much likes, especially outspoken Monty. The two friends are fiercely and unapologetically each other’s most important person.

Monty works at a bookstore owned by her lesbian trans aunts, and is also engaged to her sweet friend Gilbert Gus, who she adores, but is more likely to play games with than kiss. When Tessa’s lackluster fiance cheats on her, Monty takes her on an alternate honeymoon. This leads to the two going on practice dates to help Tessa ease into dating again. Along the way these two figure out what everyone around them already knows: they’re perfect for one another.

Tessa and Monty have an intensely loving friendship, and watching them discover their romantic side left me squealing with joy. Their dynamic is a balm for every fan who sighed over two straight characters who clearly should be dating each other, whether that’s Rizzoli and Isles, or Diana and Anne.

Who We Could Be has an idyllic, fairy tale quality. It’s set in a progressive small New England town, and cocoons the characters within this supportive atmosphere. Instead of leaning into the drama of ended engagements and newfound sexuality, the story resolves potentially obstacles easily, letting Tessa and Monty’s playful relationship take center stage. I appreciated that the characters come to recognize their queer sexuality before falling in love with one another, and the role Monty’s aunts play in their drama-free coming out process.

Cameron specializes in stories about BFFs who fall in love, and after reading Who We Could Be, I devoured her backlist. This remains my favorite version of this trope. Highly recommended for fans of quiet romances.