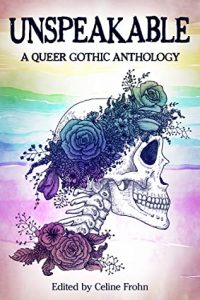 Gothic fiction is my jam. I love the slowly building sense of dread that is the cornerstone of the genre. If I could have the job of any fictional character, it would be the creepy groundskeeper of the haunted manors in gothic ghost stories. I also (as you can imagine from me writing for this website) love queer stories. Looking back, my favorite horror and gothic books have consistently been those with queer elements. So as soon as I saw Unspeakable on the list of books up for review, I knew I had to read it. I’m happy to say that this short story collection lived up to my high expectations.

While all of the stories include gothic elements, they are all very different. The stories run the gamut from classic, historical gothic horror to modern-day shapeshifter romance. This collection is stronger for the diversity in storytelling that it holds. I loved the ones that had explicit sapphic relationships, but the ones without them were just as good, too.

One feature that really stood out to me in this collection was the setting. As I said, I love classic gothic stories. So every story that took place in an old, desolate home overlooking a grey sea made me very happy. The stories that I thought used setting to their advantage the most were “Hearteater” by Eliza Temple and “Quicksilver Prometheus” by Katie Young. Both of these stories used the grey, dark classic gothic setting to show the inner minds of their main characters. “Quicksilver Prometheus” also stood out to me because of its brilliant use of historical elements. That was definitely one of the best stories in the collection for me. Other stories that had amazing settings were “Moonlight” by Ally Kolzow and “The Moon in Glass” by Jude Reid.

Three of the other stories also stood out to me as being exceptionally good. The first was “Laguna and the Engkanto” by Katalina Watt. This sea creature horror story incorporated the culture of the Philippines to create a truly unique and horrifying tale. Watt’s writing was also featured in another one of my favorite recent anthologies, Haunted Voices. I will definitely be seeking out more of her work.

“Homesick” by Sam Hirst almost made me cry. I wasn’t expecting such a profound and beautiful love story between two ghosts. In my opinion, it also had the best opening line in the book (and maybe of any short story I’ve ever read). This one was simple, but incredibly beautiful. It will certainly stick with me.

Finally, “The White Door” by Lindsay King-Miller turned a classic story on its head and proved that gothic stories can absolutely work in a fantasy setting. I was impressed by how well this one drew on standards set by classic works in order to create something completely unique. It also had an amazing and very chilling ending.

Overall, I really loved this anthology. I can see myself rereading it at night in October, waiting for something spooky (and potentially even sapphic) to happen.

Kayla Bell is the pen name of an author, reviewer, and lover of science fiction, fantasy, and horror. You can catch up with her on Instagram @Kreadseverything for more book reviews and updates about her writing.

This book had me in two words: queer. Gothic. I have long-held passions in both areas. The gothic is the realm of the outsider, the rejected, the monstrous. It lends itself to queer interpretation–and that is mostly what queer gothic is. Just interpretation. The height of gothic literature was, of course, the 18th and 19th Centuries, beginning with The Castle of Otranto and spidering out into different sub-genres and interpretations right up to the present day. There are queer interpretations of gothic literature, definitely: my favourites include Susan Stryker’s “My Words to Victor Frankenstein above the Village of Chamounix: Performing Transgender Rage,” and Skin Shows by Jack Halberstam. There is obviously The Picture of Dorian Gray, but also the interpretation of The Strange Case of Dr Jekyll and Mr Hyde as being an allegory for the closet, and the ambiguous sexuality of Dracula. The gothic is queer, inescapably. So when I saw Unspeakable: A Queer Gothic Anthology, my true reaction was to say, “oh. Finally.”

The anthology spans identities, each story offering up new characters with new queerness. A large proportion of the stories are about WLW–women who are seduced by vampires, who dance with the ghosts of their murdered wives, who kill their lovers, and fall for monsters from the deep. Sometimes these women are the ones who are monstrous, which is of course, the potential of the gothic. This is the most exciting thing for me, a feeling which is only compounded by the fact that their queerness is not what makes them monstrous. They are given power in their monstrosity.

The contributors to this anthology understand the genre to its core. There was not one story that felt amiss, each with the kind of rich and immersive prose which typifies gothic writing. I was pulled into each chilling tale easily and readily, the language acting as a kind of through-line for this diverse collection of stories. Even though each is by a different author, with a different approach to the genre, they read as part of a whole. The anthology is cohesive and interconnected, with some stories sharing similar themes and imagery in a pleasing way–the same hallmarks of the genre, used to different effect.

There are all kinds of queer women in these pages. Some of my favourites were the stories that explored the idea of a woman out of time–a woman with an identity which we might now refer to as butch, but constrained by Victorian sensibilities. There is something eminently enjoyable about a rakish and debonair Byronic hero in cravat and breeches, but oh wait! She’s a woman, and she’s here to seduce your wives. I enjoyed the troubled Kat in “Hearteater” by Eliza Temple, who has exactly the right amount of tortured soul.

And on that point–seduction. I haven’t yet mentioned one of the drawcards of the gothic, that being the simmering eroticism of all things dark and disturbed. There’s a reason why we find vampires so sexy. The authors of Unspeakable haven’t forgotten this, either. A number of the stories are filled with just the right amount of sexual tension and saucy contact. It is sometimes devilish, and always welcome. “Laguna and the Engkanto” by Katalina Watt stands out: a story with a folk tale feel which absolutely sizzles.

The stories that don’t have that note of the erotic are filled with another gothic (and queer) emotion: yearning. The sense of something lost, of a need to pierce the veil, to find some fulfilment and compromise your own goodness to do so… these are all gothic elements that are woven through the stories of Unspeakable. Remember that while the gothic is horror, it is also romance: it is heightened emotions, a deep plunge into the psyche and the human condition. “Moonlight” by Ally Kölzow is one such narrative, which left me with such a deep sadness that I am still thinking about it, days later.

It bears mentioning that a lot of these stories rely on tropes. These are, of course, conventions of the genre, and some might call them clichés. I think it is important to be reminded, however, that applying these “clichés” to queer narratives is something completely new. It is a reinvention, and it is inspired. Even though some of the stories are familiar and predictable, the expected outcome is the desired outcome: we deserve our turn with these stories, and they are all the more enjoyable for it.

This anthology is a powerhouse of an introduction to the work of some very exciting writers. Their dexterity within the genre is admirable, and made this collection an utter pleasure to read. For lovers of the gothic, it is an absolute delight. If you are unfamiliar with the genre, it is a perfect introduction (although be prepared for any further forays to be a lot more subtextual on the queer front). It was so soothing for me to be able to read within a genre so dear to my heart, and to see it full of queerness. At the risk of sounding over-the-top and extremely sappy, my devoted thanks go out to Celine Frohn and the contributing authors. They have created something truly special, which feeds the monster in us all