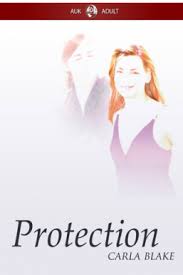 Protection by Carla Blake is labelled an erotic thriller.  The story is centred on the relationships between actress Carrie Shilling, her bodyguard Andrea Stone and Isobel Pearce, a woman fascinated with Carrie. Carrie is a rising star, who recently left a popular TV soap to star in high profile movies. After a terrifying run-in with excited fans, a decision is made to hire an undercover bodyguard who would pretend she was merely Carrie’s friend to the public. Andrea Stone, the hired bodyguard, is an out lesbian and the novel follows the development of the relationship between the two characters. Alongside this, the novel follows Isobel, with her growing obsession and clever tactics to get closer to the star.

In all honesty I struggled to finish this novel.  If I wasn’t reviewing this novel, I would have stopped reading it after the third chapter. Blake’s writing style didn’t quite sit right with me and the story failed to engage me. I found the characters two-dimensional. Many of the conversations between the characters felt forced and unnatural. There were elements in the story that could have been interesting, had they been examined in greater depth. Instead issues such as Carrie’s coming out, the relationship between Carrie and Andrea and the impact of having a stalker were dealt with in a fairly shallow manner. The book did have an erotic aspect to it, but perhaps due to my apathy towards the characters, none of the sex scenes even really drew me in.

Aside from my lack of interest in the story and the characters, there were other factors that made it difficult for me to finish the book. I was extremely uncomfortable when a boy in a crowd of fans jumping on Carrie was described as “the coloured boy”. This is not an old book, it was published in 2010, and such language is offensive and inappropriate. Sadly, this very minor character was also one of the few visible people of colour in the story.

Body shaming was also present throughout the book and again, made me quite uncomfortable. For example, at one point, Carrie refers to a job applicant in the following terms:  “there’s one who’s as wide as she’s tall and quite frankly is so ugly she’ll curdle the milk.” Rather than this being just a flaw of the main character, the body shaming is present at numerous points in the story, including during the third person narration.

There were also a large number of typos in the book. A lot of books do have the occasional typo but there were enough in here for it to disrupt my reading flow significantly. In addition, words were underlined for emphasis when they should have been italicised. These errors could have been forgiven if the story was engaging but instead, it added to my irritation with the novel.

I’m reluctant to write such a negative review of a book but unfortunately I don’t have any positive comments to make. There is little to redeem this book and I wouldn’t recommend it. There is a lot of fantastic lesbian fiction out there and I think readers should look elsewhere for some hot lesbian bodyguard action!