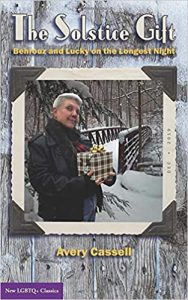 The Solstice Gift by Avery Cassell is a queer love story in the best sense of the words. It doesn’t follow the traditional, heterosexual tropes of how the two characters meet and following them through their courtship, but comes in with the love story well under way, and continues with new and radical sexcapades that bring the couple closer together, exploring identity, gender, sex, kink, and love in the process.

As a queer, kinky person myself, I loved Cassell’s descriptions of the negotiations, both from a non monogamous and a kink perspective. Cassell clearly knows about the genders, sexualities, open relationship philosophies, and kinks in this book. I love the elaborate references to queer and literary culture — many of which I didn’t understand, but I still like how that adds richness to the prose and feels like a conversational with queer and literary history.

I love reading a queer book with characters who are older, and with a couple who are both butches. Despite more and more representation, graphic sexuality for folks who are over 40 is still rare, and butch/butch desire is not nearly as common as many other gender combinations. I also appreciate how easefully they navigate the openness of their relationship. The book doesn’t go into the envy, jealousy, or insecurities that can come up for open relationships, but I didn’t really miss that content. It just felt like it was more of a queer kinky fairy tale than a real-life depiction of what navigating threesomes is like (I don’t know about you, but in my experience, they are often sexually frustrating, feel incomplete, and end up with someone feeling left out). And sometimes, frankly, I just want the fairy tale version — I want everyone excited to be there, getting off, communicating with exquisite precision, and generally having a gay ol’ time.

It’s a quick read, just over 100 pages, which makes it light enough to zoom through but still full of content and characters that have stayed with me. When I picked up the book again to make notes for this review, I caught myself just turning the pages, jumping in to yet another year’s solstice gift story, since it was so easy to pick it up again from any point and be hooked into the story.

The Solstice Gift was the winner of the 2020 Pauline Reage Novel Award from the National Leather Association International.

Picking the Solstice Gift for 2017 turned out to be easy-peasy. That was the year that our ancient Subaru Forester, Ruby Tuesday, finally shuddered to a halt and nearly went into the Subaru graveyard in the sky, but we decided to put in a last-ditch effort to get it repaired. The owners of the shop we’d been going to, Gay’s Gearhead NoHo Car Repair, had retired, so we asked around for a new mechanic. The consensus was that King’s Automobile Services was the cat’s meow. King’s Automobile Services’ slogan was “King’s: Where queens are kings, kings are queens, and service reigns!”, and they were known for a series of peppy commercials that featured the owner, a dapper stud named Leroy King. Leroy looked to be in her mid-50s, had greying dreadlocks, a fondness for wearing a forest green bandanna as a neckerchief, ironed grey mechanic’s overalls with “King’s” embroidered in curly red script across her chest, deep-set dark eyes behind retro black eyeglasses, and a sparkling gold labrys inlaid in one of her front teeth.

Of course, we had other contenders, but Lucky and I were totally crushed out on Leroy and the others faded into the background like distant stars to Leroy, a luminous full moon. Yeah, we had it bad and this is how it went down.

Read the rest of the excerpt over on Avery Cassell’s site here.

Maybe it’s a little early to start thinking about your own solstice gifts, but if you know some queers who like books, kinky sex, ethical non-monogamy, and queer literary references, this will be a great treat.

Buy it directly from Avery Cassell at their Etsy store (and pick up an embroidered bandana while you’re there, too). 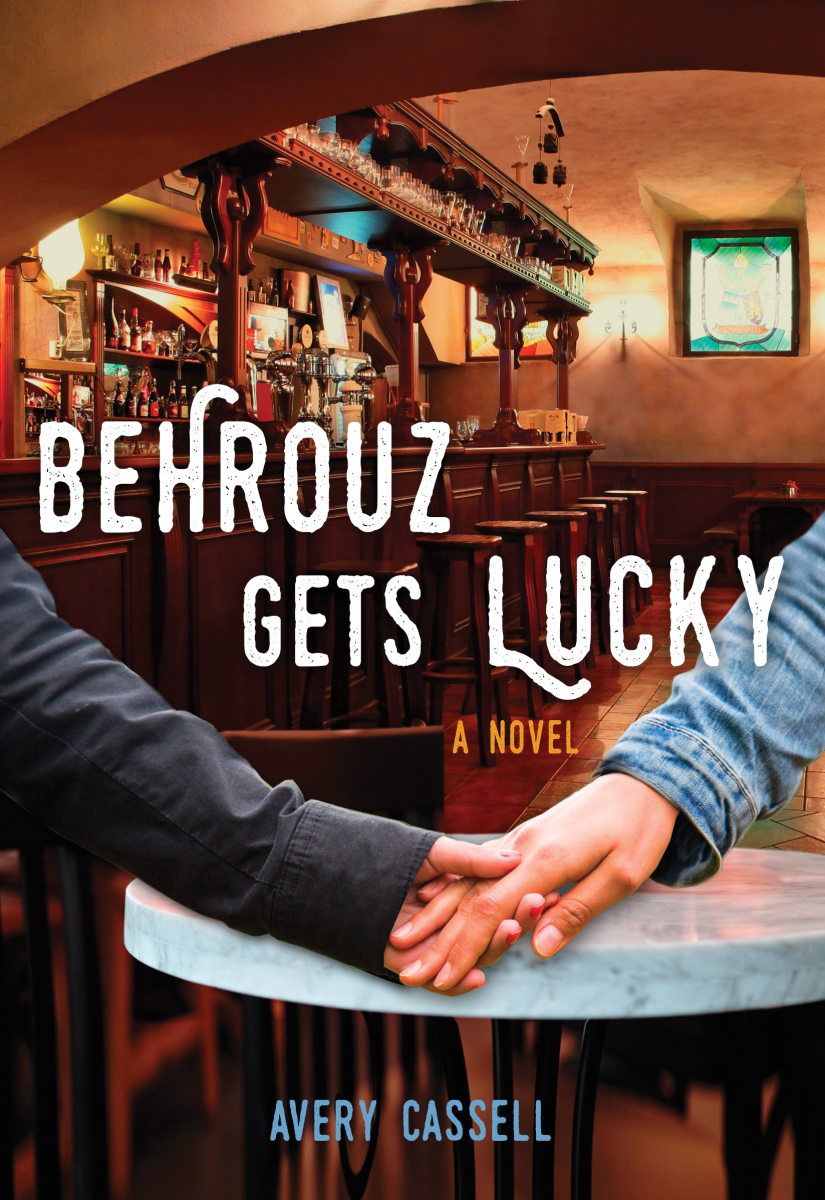 I wanted to see older genderqueer and butch masculine-masculine couples having hot sex and BDSM shenanigans. I wanted to read about people with full lives, lives that included adult children, grandchildren, parents, books, marvelous food, over-the-top drag, and cuddly cats along with lots and lots of hot fucking. I wanted reality, with heartburn, forgetfulness, and aching joints. I also wanted protagonists that cared about San Francisco and were activists, in their own quirky way. And finally, I spent most of my childhood in Iran and love Iran as my other home. I wanted to include a little bit of that amazing and beauteous country in this tale so that my readers could get the chance to love the country too. (viii)

As this paragraph suggests, Behrouz contains an ambitious political agenda and a busy social schedule. I was excited to read this romance because it contains a lot of elements that I typically loved to see in my romance novels: queer characters, older characters, characters with mixed racial and ethnic cultural experiences, a lot of domesticity alongside political awareness and people having sex. Unfortunately, although I am still rooting for all of these things to happen, and happen more often, in romance literature, Behrouz felt more like a rough first draft than a finished novel.

Behrouz is strongest when it comes to the (many and varied) sexual encounters between the title character, Behrouz, and their lover and eventual spouse Lucky. Lucky and Behrouz meet online through OKCupid and after a three-hour first date at a local coffee shop return to Behrouz’s apartment to get it on. Both characters identify on the transmasculine end of the gender spectrum and this work succeeds in its mission to create delicious sexual intimacy between these two characters whom most cultural narratives suggest are too similar to enjoy — let alone sustain — sexual chemistry.

Where Behrouz falters is in the extra-sexual narrative, which often feels like dense authorial notes on plot development, setting, and character description than they do finished prose. I kept wanting to say “slow down and show me this happening rather than tell me it did!” Too often, the characters — secondary ones particularly — failed to emerge out from under their representative types. Self-aware typecasting can, at its best, allow an author to paint a loving portrait of a well-known place or community (think the early installments of Armistad Maupin’s Tales from the City) — and Behrouz at its best reaches toward a smuttier version of the sort of episodic ode to the Bay Area of the pre-Google age that is Maupin’s forte.

Yet overall, narrative shortcuts mean that the reader is given a list of physical descriptors, identity labels, and group affiliations that end up standing in for three-dimensional individuals. To give two such examples, both drawn from the same scene in which Behrouz and Lucky host a potluck for their friends shortly after becoming a couple:

I’d forgotten about how judgmental people could be, particularly when others start coloring outside of the lines. Masculine-masculine couples were not common in the dyke and queer community, and many folks saw masculine pairings as distasteful, taboo, and unnatural. Or only good for tricks, something to relieve the itch if there wasn’t a femme around. There were a smattering of dyke and genderqueer Daddy-boi couples in the kink community, but they were mostly people under the age of forty. Dykes, queers, and transmen over the age of forty were pretty strongly invested in butch-femme or FTM–gay men dynamics. There was even the Butch-Femme Social Group, and TM4M Cruising Night at Eros for transdudes and gay men. (48)

In both of these instances, important markers of identity (clothing choices) and the social-political dynamics a particular moment within San Francisco’s queer subculture are condensed into lists of attributes and identity affiliations that stand in for character and plot development. I wanted to say, “These are your research notes … now go write me a story.”

Another facet of the social-political at work in Behrouz is the titular character’s identity as an immigrant.Behrouz’s experience as a Persian-American genderqueer individual — “I’m Middle Eastern to my part-American core” they observe early in the narrative (3) — is given scant attention until the second half of the book, when the couple travels to Tehran. I was disappointed not to have a better sense of Behrouz’s experience as a queer  American of Middle Eastern descent in the post-9/11 era.

I also had concerns about the way the couples’ visit to Iran, which involves the decision to marry so that they can pass as a straight couple while abroad, serves as touristy background to the American queer experience. The cross-cultural encounter is, of course, complicated by the fact that Behrouz, like the author, spent part of their childhood in Iran. Yet as Americans with American passports and established lives in San Francisco, Behrouz and Lucky interact with Tehranian culture as outsiders, not insiders, and that privilege is not allowed to really settle into the bones of the narrative, with all of its complex implications for individual and collective meaning.