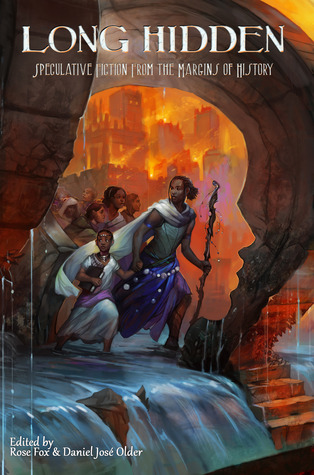 Long Hidden is an anthology of stories that take place between the 1400s and early 1900s, include some element of speculative fiction (mostly fantasy, some horror, a little sci fi), and are about marginalized people. This is not an all-lesbian collection, as you probably guessed, but it does include at least two lesbian stories (at least one may be subtextually lesbian), as well as two trans women stories.

I was very excited to read this book. I think it’s a collection that is far overdue, and I hope that there will be many more like it. I felt like it was a little slow to start out with, and personally enjoyed the later stories more than the beginning few, but overall it lived up to my expectations. The collection as a whole is dark, especially the first quarter or so of the book, which seemed to have every story revolve around death. I loved the different takes on “speculative fiction” covered in the stories. One of my favourite stories, Each Part Without Mercy by Meg Jayanth, dealt with people who can walk between dreams, and other people (like the main character) who can construct dreams stable enough to support these dreamwalkers. This concept was so interesting, I felt like it could be a whole novel. It made me curious to seek out the author’s other work, which is one my favourite things about anthologies. They can lead you to all sorts of new authors.

Long Hidden is also illustrated, with each story having a different style of illustration accompanying it. I loved this aspect, and though the illustrations complemented the story beautifully. (Also, that cover is gorgeous.) Take this illustration of the story “Jooni”, for example. 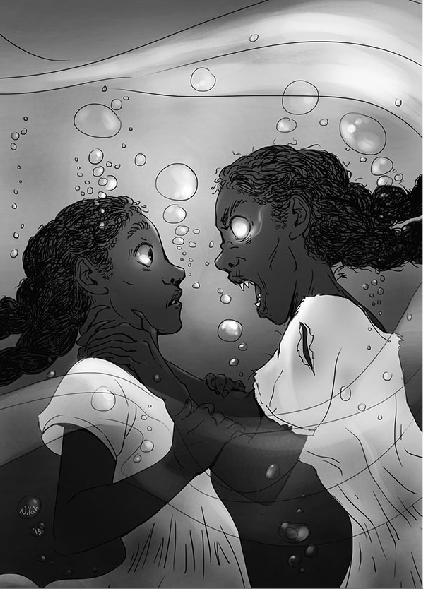 Isn’t that an intriguing image to preface a story? Having the two combined makes it all the more memorable. Skimming through this collection to see my notes, I realize how much these stories stayed with me. They have such atmosphere to them, it makes them difficult to forget. On reflection, I think this is a book I would like to return to and re-read. It’s unfortunate that my least favourite stories were in the beginning, because I think they distracted me from noticing how much I enjoyed the anthology as a whole. (Not that the first stories aren’t skilled; they just weren’t as interesting to me personally.)

I did have some complaints, however. I didn’t realize before reading Long Hidden that all of the stories took place between the 1400s and 1900s. I was disappointed to not have any stories that stretch further back, though I’m hoping that another collection will do that. I was also a little disappointed about the diversity of settings. Although all the characters are marginalized, and almost all of them are people of colour, the settings are disproportionately either in North America (usually the U.S.) or Europe. North American stories took up nearly half the book, and put together, stories taking place in North America or Europe were two thirds of the stories included. Three take place in Africa, four in Asia, one in the Ottoman Empire, and one in Central America (none in South America). That isn’t to say that the stories of marginalized people in North America and Europe aren’t important, but I was hoping for more diversity there.

Now onto the lesbian stories!

“Marigolds” by L. S. Johnson is set 1774 Paris, and is about women in… essentially a brothel. Men seek out these women while they are menstruating, because they believe the women’s blood will give them power. But Mémé, the women who runs the brothel, is attempting to harness this power for political purposes–attempting to spark a revolution. Claire, the main character, is in love with one of the other women, Isabella. Claire is unsatisfied with her life in the brothel, suspicious of Mémé and what she’s willing to sacrifice to gain power, and is prepared to risk everything to be with Isabella. This was a great story, with interesting magical elements, and a solid plot. If you’re on the fence about picking this up based on how few lesbian stories there are, I’d say the quality makes up for it.

“Nine” by Kima Jones is set in 1902 Arizona, and features Tanner, a black lesbian, who runs a hotel with two other women, Jessie and Flo. They have an idyllic, though busy, life considering the time period, but for one issue. Tanner’s ex-girlfriend is extremely powerful, and has a vendetta against Tanner. Which means that her and everyone she loves are cursed. Oh, and Tanner’s ex keeps sending people to kill her and her family. The characters in this story are so believable and rich, it feels like you’ve known them for ages. This isn’t a happy story, but the characters are resilient, which leaves some room for hope. Definitely enjoyable.

So, although in some ways I wish Long Hidden was even more diverse, it’s still far beyond the uniformity seen in most anthologies. I really hope that there will be even more in this style, because this is a beautiful book, and one I would recommend to anyone. I’ll leave you with my favourite illustration (which happens to be from one of the lesbian subtext stories). 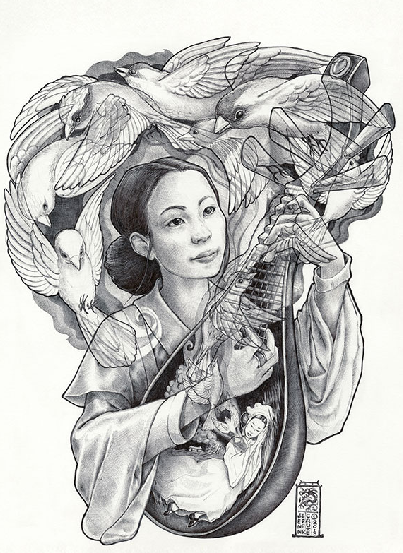