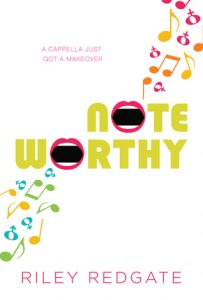 This is a story that I still miss days after reading it. I was completely absorbed in the story, and I read most of it in one day. Jordan’s double life (disguised as a boy to join an all male capella group), the arts academy environment, and the world of a capella was all fascinating. Add to that Jordan’s struggle to fit into an elite private school on a scholarship while her family struggles to make rent, as well as an ever-more-vicious rivalry with another a capella group, and I was hooked.

I also found it interesting to read a crossdressing narrative that addresses the queer subtext. There is a long history of crossdressing in queer narratives, but usually the queer possibilities are swept under the rug as much as possible. This is a modern crossdressing story that faces them head on. Jordan isn’t trans or genderqueer, but the story acknowledges the existence of trans people, which is the first I’ve seen in this genre. Jordan borrows tips from trans websites and feels guilty about using them. When people begin to find out about her other life, they initially think that she is trans and are accepting about it, but she explains that she is cisgender.

The way crossdressing narratives usually flirt with queerness but ultimately sidestep it is by having a woman fall in love with the woman-in-disguise. The woman thinks she’s a man, so it’s not queer! Once her disguise is discarded, that romance evaporates. Meanwhile, the woman in disguise falls for a guy, but he only falls back once the disguise comes off. [mild spoilers] In some ways, Noteworthy plays into this: a girl kisses Jordan while she is Julian, and she falls for a straight guy while in disguise. The difference is that Jordan realizes through this experience that she’s bisexual. She names herself as bisexual. Unfortunately, the girl she kisses is straight, so there’s no significant F/F romance, but there’s no mistaking that Jordan is bi. [end spoilers]

The only thing that fell flat for me was that some of the members of the Sharpshooters blended together—only a few felt like fleshed out characters. (I did really love Nihal and Jordan’s relationship with him, though.) The author is obviously very familiar with a capella, so some of the details of the arrangements went over my head, but that wasn’t distracting. This was an absorbing, nuanced, and utterly enjoyable read.