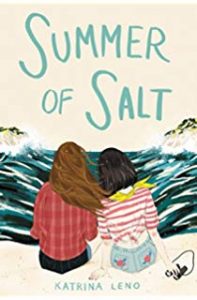 [this review contains plot spoilers and discussion of rape]

The first half of this novel reads like a landscape painting and the second half reads like a murder mystery featuring an emotional climax, with a sweet but slightly underdeveloped romance sprinkled throughout. In a town on a small nondescript island, magic and salt are always in the air. Georgina Fernweh is the twin sister to Mary, and she’s the only living Fernweh whose magic has apparently not yet manifested itself. This, combined with the fact she’ll leave the island for the very first time when she turns 18 in late August, means her summer is set for the perfect coming-of-age tale.

The first half of the book mostly concerns itself with worldbuilding and character introductions. While the absence of a strict plot makes for slower pacing, it’s done gorgeously and allows the reader to immerse themselves in the life of Georgie. We get to follow the relationships and quirky behaviours of Georgie and Mary (who could not be more polar opposites), their mother, and the cook (the Fernwehs run a B&B) as they prepare for the tourist season. We meet some minor local characters, some of whom endear themselves immediately (best friend and proud aro/ace Vira) and some of whom leave a bad taste in the mouth (side-eyes Nice Guy™ Peter).

Over the course of the book a sweet romance blossoms between Georgie and Prue (one of the tourists), with some adorable hiccups: while Georgie is out (alternately using ‘lesbian’ and ‘gay’ to describe herself), she still needs to figure out if Prue is interested in women. Prue explains she’s only known she’s not straight for about a year and she doesn’t use a label for herself, but she’s definitely attracted to men and women. In a lovely montage of Georgie coming out to those she cares about individually, all of them accept her, but she also realises that she doesn’t know what Prue’s life off the island is like. This is the clearest indication that Prue is unfortunately underdeveloped as the main romantic interest.

At the midway point there’s a very stark shift in tone [minor spoilers moving forward] as the island discovers the murdered body of their main attraction, 300-year-old bird Arabella. Suddenly rain won’t stop pouring down, to the point that the weather becomes a character of its own. Mary is acting strangely, and most everybody suspects her of killing Arabella. Georgie teams up with Prue’s brother to prove Mary’s innocence, which makes for a budding friendship. While this half is more action-driven, it never loses the magical tone or the family focus which form the heart of the story. As the murder mystery format dictates, there is a final unveiling, and it is not a pleasant one. I’ll leave you to discover the details in the book, but [major spoiler] Peter raped Mary. [end major spoiler]. Leno treats this topic with great care. It was painful to see Mary turn completely into herself and disappear, so her choice to eventually share what happened to her becomes all the more poignant. As a result, the reader is presented with a bittersweet ending in Mary’s resolution and an open-ended conclusion for Georgie and Prue.

I wish we could have explored the various minor characters a bit more, especially Prue and Vira and the ways they care about Georgie and the island. Still, this does not take away the fact that The Summer of Salt is a lovely book with an oddball murder mystery, vibrant background characters, so many different types of female connections, a great boy & girl friendship, wlw and lesbian and aroace representation, organic integration of magic, and gorgeous worldbuilding.