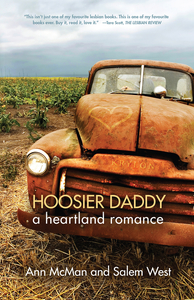 I was perusing Hoopla’s queer romance section since I have been on a romance kick lately, and I came across Hoosier Daddy by Ann McMan and Salem West. A lesbian romance about union organizing? Set in Indiana? With a pun for a title? As a queer lady whose roots are in Indiana and whose friends have recently organized a union drive, I had to read it. It proved to be an interesting read, although the fate of the factory was, at times, more interesting to me than the fate of the main romance. Still, it was good to read a queer romance set more off the beaten path, as you will.

Hoosier Daddy features Jill “Friday” Fryman as she works in a factory in her small hometown. Conditions are rough in the factory, there’s rumors of a buyout, the annual Pork Festival is coming up and emotions are high, and in the midst of all of this a couple of “union agitators” roll into town to try to drum up interest in unionizing the factory. One of the union reps, El, catches Friday’s eye. Friday has to navigate her feelings for El, her professional life and opinions as a line supervisor at the factory who is getting dragged ever deeper into management politics, and how it all interconnects with her small town life. This book struggles a little in attempting to balance scenes of small town life, factory and union politics, and scenes of queer romance in a straight rural town, and it shows in how Friday struggles to make any sort of proactive sense of her own choices as events progress. There are some homophobic incidents, but all of Friday’s personal relationships are positive, albeit sometimes that special brand of rural supportive that is also sometimes backhandedly insulting.

I was eager to read a queer romance set in a rural setting, because, obviously, queer people do exist in rural areas but media often leaves them out. And I think Hoosier Daddy gets a lot right. Friday’s friends and family profess their brand of support for her sexuality (usually starting with some form of “it doesn’t bother me but”) while on the other hand Friday’s car is vandalized twice because of her relationship with El. It’s a rural dynamic that allows El and Friday to have a relationship where Friday can introduce El to her Grammy and friends but still means that there’s no doubt as to why the air gets let out of her tires at the bar. Other details also struck true to me, including all the descriptions of the Pork Festival, the community importance of the fish fry at the VFW, and how it’s impossible to escape meeting people who are related to someone else you know. Everyone in town being intimately aware of all the drama also feel accurate. Friday’s immersion in the community is vividly brought to life in a very vivid and familiar way, which I liked, because in that small a setting it is very hard to separate.

Which is why the plotline of whether the factory will unionize is as big of a deal as Friday and El’s romance, because the mood of the community directly effects Friday and El’s relationship. The book itself seemed strangely ambivalent on whether you should root for this unionization effort to succeed or not. The factory clearly needed to unionize. Safety regulations are routinely ignored. Friday’s boss verbally harasses her several times. What you get to eat at the cafeteria is dependent on whether the cafeteria manager likes you. Management engages in blatant union-busting rhetoric and bribery. Public opinion is constantly against the “union agitators” except for the few radicals they manage to attract right away. It all culminates in a death, which finally swings the momentum towards unionizing. But then the buyout goes through and the new management seems genuinely good while also pushing anti-union rhetoric. I was left very confused as a reader as to who the book was rooting for, since the union clearly needs to happen even while it paints new management so glowingly. I was also baffled as to why Friday couldn’t seem to maintain a consistent opinion on what was happening at her job or her relationship with regards to these changes, always reacting rather than acting.

Which leads to the purpose of this book: Friday and El’s relationship. From the get-go their chemistry is of an instant, physical sort. They end up having a lot of hot encounters (too many of them in public restrooms for my taste but still fun), but it takes them forever to have any sort of real conversation or connection. In my opinion, Friday and El make more sense as a summer fling. It would be right for them to avoid discussing their work if this was a short term affair, but if they really want to make this work long term they need to discuss professional and social boundaries and be upfront about it. It makes sense for them to continue to hook up in bathrooms if this wasn’t a relationship that was going anywhere, but if they both really felt a deeper connection – Friday has her own house or El has a hotel room right there, no bathroom stalls without doors included. I’m glad that El had the wherewithal to get herself into a place where the relationship made more sense by the end of the book, because for much of the book they felt like a floundering, although passionate, mess.

All in all, while it was refreshing to read a queer romance set in a rural area, the romance itself got lost in the setting and the plot line that consumed the whole town. Friday and El were always so caught with reacting or dealing with their surroundings that they had little time to develop their own relationship past a physical level. Plus, while there are lots of dogs appearing in this book, every single one of them has flatulence which is described in detail? Which is really an unnecessarily gross level of description that no one really needs, in my personal opinion. Overall, I had a lot more feelings about the state of the factory’s union than Friday and El’s union, but the setting puts this book at a 3/5 stars in my book. Small town girls deserve queer representation too!