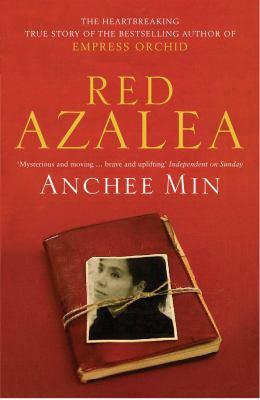 This year I’ve been doing a reading project of only authors of colour, pretty much all LGBTQ.  I’ve read a ton of great stuff, and one of the best things this challenge has made me do is discover some authors that I never would have encountered otherwise.  One such writer is Anchee Min, whose memoir Red Azalea I read a few weeks ago.  I was totally and utterly blown-away by the gorgeous, unique writing and the page-turning, I-can’t-believe-this-is-true plot.  I can’t believe I might not have found this book if I hadn’t made an effort to research books by queer people of colour.  Shame on me for not reading this earlier.

Red Azalea follows Anchee (note: I decided to refer to her by her first name since it feels weird to call the character in the book by a last name!)  growing up in the last days of Mao’s China, during the Cultural Revolution of the 1960s and 70s.  It was a movement to “purge” remaining capitalist and traditionalist elements in what was now a communist country.  As a child, Anchee was part of the Red Guards, a youth military group dedicated to enforcing Maoism and the Cultural Revolution.  In her late teens, she was later forcibly sent from the city to work at a communal farm—as were millions of other urban youth to work brutal days from 5am to 9pm.  After a few years, Anchee was miraculously plucked from obscurity to partake in the Chinese propaganda film industry in Shanghai, where she encountered a whole other host of problems.  She eventually left China for the US in the 80s.

I am very sorry, I don’t remember you. I don’t think I ever had you as my student.

It’s in the second part of the book that Anchee is forced at age 17 to part with her parents, who “stood there like frosted aubergines—with heads hanging weakly in front of their chests” as the truck drives off, their daughter riding in the back.  It’s at the communal farm that Anchee meets Yan, a legend, a heroine renowned for her brute strength on the farm and dedication as Comrade Party Secretary.  This is Anchee’s first glimpse of the woman she later falls in love with:

She had a pair of fiery intense eyes, in which I saw the energy of a lion.  She had weather-beaten skin, thick eyebrows, a bony nose, high cheekbones, a full mouth in the shape of a water chestnut.  She had the shoulders of an ancient warlord, extravagantly broad. She was barefoot.  Her sleeves and trousers were rolled halfway up.  Her hands rested on her waist.   When her eyes focused on mine, I trembled for no reason.  She burned me with the sun in her eyes.  I felt bare.

As the two women’s relationship develops, Anchee begins to realize just how sexually repressive the regime is, in addition to the isolation, alienation, and general mass psychosis.  I’m not talking just about queer sexuality: the system does not allow the young women at the farm any sexuality at all.  A friend of Anchee’s is mentally broken and eventually commits suicide after being interrogated and humiliated after being found with a male lover.  What’s fascinating and disturbing is that the party officials present this type of action as feminist, and declare they saved Anchee’s friend from being raped.

When I say this book is beautifully, uniquely written I especially mean the way Anchee Min writes about her growing love for Yan.  It’s Yan who makes her feel write this: “I stood in the sunshine, feeling, feeling, the rising of a hope.”   A hope like this:

She asked me to feel her heart.  I wished I was the blood in that chamber.  In the hammering of her hearbeat, the rising and falling of her chest.  I saw a city of chaos.  A mythical force drew me to her.  I felt the blazing of a fire inside me.

When Yan and Anchee finally kiss, it’s beautiful, and sexy, and just everything you’ve been wanting in a love scene.  Trust me.  Okay, don’t trust me: read this quotation:

She said, I want you to obey me.  You always did well when you obeyed me. She licked my tears and said this was how she was going to remember us.

I moved my hands slowly through her shirt. She pulled my fingers to unbutton her bra.  The buttons were tight, five of them. Finally, the last one came off. The moment I touched her breasts, I felt a sweet shock. My heart beat disorderedly. A wild horse broke off its reins. She whispered something I could not hear. She was melting snow….The horse kept running wild.  I went where the sun rose.  Her lips were the colour of a tomato.  There was a gale mixed with thunder inside me.  I was spellbound by desire.  I wanted to be touched.  Her hands skimmed my breasts.  My mind maddened. My senses cheered frantically in a raging fire.

There’s something about the phrases and metaphors that Anchee Min creates that are strikingly different from any other writing I’ve read in English.  If my calculations are correct, she was about 30, maybe a bit younger when she moved to the US, with only a minimal knowledge of English; this means she was relatively old (in terms of language learning) when she started writing and speaking in English.  The lovely, strange way she writes made me think about what kind of effect speaking more than one language has on your writing.  As an ESL teacher, it made me wonder if teaching English students to write and speak like native speakers might be detrimental to their creativity, that minimizing the different ways in which they speak English might actually be a bad thing.  I can’t imagine a native speaker of English coming up with some of the images Anchee Min does, and that’s what makes it such a beautifully written memoir.

I feel like to discuss part three of the memoir would spoil some things that must not be spoiled—in my opinion, anyway—so I won’t get into too much detail.  Once I got about half way through this book, I couldn’t put it down, while I wanted to savour the language at the same time.  You’re in for stunning, sensual writing right until the end, even or perhaps especially in Anchee’s despair and heartbreak: “I could hear the sound of my dream’s spine breaking.”

You should move Red Azalea to the top of your reading pile.  I promise, you won’t regret it.