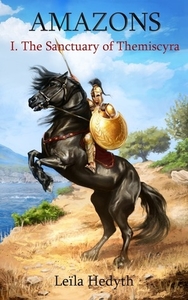 In the first of the Amazons series by Hedyth, Kylla is rescued from imprisonment and thrown into an otherworldly adventure on the mythical island of Themyscira, home of the legendary Amazonian women. However, the paradise of a land ruled by women, away from the patriarchal world, is not all it seems. Kylla soon learns the history of the Amazons, as well as their secrets and regrets, and what role she plays in it all.

I had a hard time getting into this book, as the language felt awkward and out of place, not only in the dialogue, but in the exposition. I do recognize though that this was written in translation, so it could simply be a matter of that. It seems like such a small detail to nitpick, but the constant repetition of certain words, like “grandiose” to describe everything that left Kylla in awe or “piercing” to describe everyone’s eyes, is distracting when trying to follow the story.

The language also felt stilted and unnatural, as if the author/translator tried to create a lofty voice for the Amazons. The problem this creates is one in which not a single Amazon is discernible from another. Even the main character sounds like this, but she comes from what can only be described as “the real world,” so there isn’t a clear reason as to why she speaks this way.

There’s a lack of setup for the world Kylla lives in before she’s rescued and taken to Themyscira. It’s a vague context of an overly patriarchal world that uses and abuses women, but not enough time is spent developing that world to show why Kylla is whisked away to safety and refuge. Throughout her time on the island, there are a few details sprinkled about her clan, giving the reader the idea she might come from indigenous people, but it’s never made clear.

As the story unfolds, more and more characters are introduced. There are the Amazons Ines, Cynthia, Lorelei, Re’gan, Johanne, the Queen Iris, and so many more. There is such a wide cast of characters that the reader never has enough time to get to know any one in particular. In fact, it’s even hard to remember that Kylla, the main character of the novel, is indeed the main character. She fades too easily into the background of what’s going on around her, never making a lasting impression.

Because of this lack of character and relationship development, the stakes fail to land and leave a meaningful impact. By the time the reader gets to the end of the book, they’re left wondering why they should care. Between the overwhelming number of characters and fast pace of sequence of events, it’s easy to tune out while reading and miss so many details. It felt like the author tried to make one book out of two or three.

The story doesn’t focus on any specific w|w pairing, but there are a couple main ones that take place throughout the novel. But again, there was such a lack of development between the characters that these romances fell short of the potential they had to bloom and depict a healthy, loving example of queer women relationships. This underdevelopment is detrimental to the inclusion of people of color among the characters as well. Brief, surface descriptions when a new character is introduced are the only indicators that this world even has black and/or brown women. Their ethnic, cultural, and racial backgrounds are so minimally important that it reads more like the author was working off a checklist of diversity.

The most compelling content in the novel is the second section, which goes into the history of the Amazons. For those familiar with Greek mythology and the mythos of the Amazons, this part of the story holds strong. It relies so much on familiarity with the myths, that without it, the novel as a whole could not stand on its own. However, within the section about the Amazons’ history, there is a standout character named Phoebe. Her story and her character are by far the most developed in the book, which keeps the reader engaged and interested to see how it all ties together.

Overall, I’d rate the book somewhere between 2.5 and 3 stars. There are moments that kept me reading and intrigued, but on the whole, I felt it needed more development. 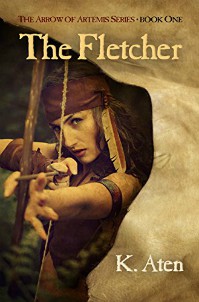 I’ve been meaning to start another fantasy series and it seems like The Arrow of Artemis is going to be it. Set in a fantasy classical (Greek) world, this series follows Kyri on her journey as an Amazon! In the first heartbreaking chapter, we see Kyri leave her home and her sick father –with his blessings – to join Shana an Amazon she had rescued, in her home nation of Telequire, with some detours.

Kyri is a Fletcher, like her father and his father before him. Her arrows shoot true and had it not been for her leaving, she would have become a master Fletcher. But sexist laws in her region and her saving Shana lead her to leave to make a future and a new home.  Shana, her new Amazon-sister is always by her side, encouraging her. She makes friends and family along two Amazon nations.

Kyri is a great Fletcher and a great archer. She has lived all her life surrounded by trees and knows to read nature, which leads her to partake in many extraordinary feats … including acquiring a feline companion. Despite all this and all the people telling her how great she is and that surely Artemis is leading her, she doesn’t believe in herself. She pushes herself to be better, greater, stronger – so that she gets her Amazon feather and mask, fulfilling her promise to herself and her father.

There were some great characters in this short book (just under 200 pages). I loved the banter between many characters especially Kyri and Shana and Kyri-Shana-Coryn. I also loved that the author did not pair up Kyri with the first female (Shana) or even her first dalliance but rather allowed for Kyri to focus on herself and develop different bonds of family and friendship.

I loved Shana but now I am used to liking more secondary characters. Apart from the thieves and guards, there wasn’t a single character that I did not like in this book. Most characters, even the hard-headed ones were relatable. As Kyri and Shana reach the Telequire nation there was a slight shift between page-time with Kyri and Shana to page-time with Kyri and Ori, who is Kyri’s love interest and very important to the nation.

At first, the introduction sounded too simple and some of the language sounded too English but as I got into it, it was a truly classical experience of candle marks and rabbit furs. I also learned new things that were used in the ancient world and new survival tips thanks to this book.

This book is slow-burn, which I enjoyed. As someone on the ace spectrum I can never understand characters that get together so soon after meeting. Kyri is about to turn twenty and has no sexual experience. In the book there were Amazons that followed Artemis’ steps and it was not shameful.

Be aware that there is a lot of animal hunting in this book. I’m vegetarian but while it was sometimes graphic, I didn’t mind because it was for survival. There’s also killing in this book, but more for self-defence or protection of others. There was a great explanation about the ethics of killing people who hurt others; the killing was not done without conscious.

I recommend this book to historical fiction and fantasy lovers and those that especially love Amazons. I’d definitely keep up with this series.