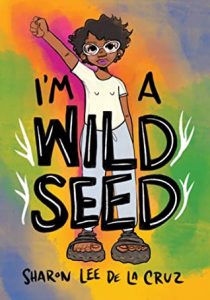 I’m a Wild Seed is a short graphic memoir exploring the author’s exploration of her identity. It’s about how her “coming into queerness,” but it’s also about her relationship to her racial identity and decolonizing gender and sexuality.

Because this is so short, it often reminded me more of an in-depth essay than a graphic memoir–that’s not a complaint! It’s packed full of memes, diagrams, and other visuals that I’m familiar with on the internet than I am in books.

De La Cruz shares not only her personal story, but also the history and context she’s learned along the way. It’s through this background that she can better understand her own identity, and she’s clearly eager to share these with the reader. She also discussed how her freedom is tied to Black trans women’s: that no one is free until the most vulnerable of us are.

She comes out at 29 because she spends her early years trying to understand her racial and cultural identity: how can she be Dominican, Puerto Rican, and Black? What does that mean for her? Where does she fit in? She explains that because it was so difficult to understand and come to terms with that, she had no time or space to question her sexual identity or gender.

This is a quick read, but it’s insightful and thought-provoking. My only complaint is that I would have gladly read a version of this book twice or three times as long!