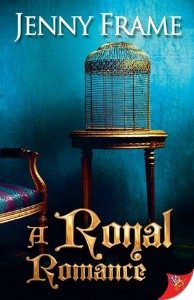 I have a soft-spot for queer royalty romance books. I have said it before and I stand by it. When I discovered A Royal Romance by Jenny Frame, it was an immediate add to my TBR. When I saw there was an audiobook, I took the opportunity to honour one of my New Year’s resolutions. The audiobook is narrated by Lesley Parkin, and let me just say that the voice was fantastic.

Set in the future, Frame’s A Royal Romance follows Princess Georgina (soon Queen) and Beatrice Elliot, a Republican charity worker. Georgina is the first openly gay monarch and the first woman to be first in line before her brother. The royal family were (almost) all a delight; they were so supportive of Georgina – although as head of the family, they rely a lot on her. Who will she rely on?

Beatrice and George meet after Georgina becomes Queen. On her road for coronation, George wants to support one main charity – to give them patronage and exposure. She chooses Beatrice’s charity for their great work and Bea, as the regional manager, is the only person who can take her around the country on site visits. This sets some sparks flying. They clear things enough to be able to work together, but the class and cultural divide is ever-present, and it doesn’t take much for hostility and misunderstandings and feelings of inferiority and inadequacy to take over. A lot of misconceptions have to be cleared up first.

Bea is refreshing to George. They both challenge each other to think in a different way. It’s a monarchy match, especially because George has to marry and she prefers to marry for love…she just has to convince Beatrice.

Sarah and Reg Elliot, Beatrice’s parents were also a delight. It’s the kind of family most people dream of.

The ending of the story was action packed. Some tragedy and lots of celebrations.

The world building in the book was deeply researched and it shows. I learned a lot of new things about monarchy and places. There were a lot of staff positions, creating this intricate web of people surrounding the royal family, although at times I felt there were too many people involved. There were also a lot of traditions (George is old-fashioned) and protocols (much to Beatrice’s annoyance). All this added up for the story to feel realistic.

While I enjoyed the story I felt there were some things that could have been better. There was the generic discourse of ‘gay or straight’. Moreover, despite the story being set in the 2050s, it’s still ‘man or woman’. I would like authors that acknowledge other sexual and/or romantic orientations and a diversity of genders! I also had minor problems with lack of explicit consent or delayed consent.

I also felt that their relationship moved too fast. Granted, there was a timeline and it’s not like they could afford to have privacy, but Bea’s character would have at least said something.

The narrator was great. Parkin gave different voices to each character and distinguished them from the narration voice. At times, I forgot it was just one person. My only issue was with the Belgian accent but accents are very hard to replicate. George’s voice is very poised, whereas Bea’s voice is saccharine sweet.

Despite loving royalty in books (they spice things up), I’m much more of a presidential republican but the reasons given in the book for Monarchy actually made sense and I went on the journey with Beatrice.

Overall, I enjoyed the story. It entertained me during many hours on the bus. The struggle for Georgie’s and Bea’s relationship was real. I would recommend to romance lovers, monarchists or British lovers. This is a perfect beach (or cozy) read.