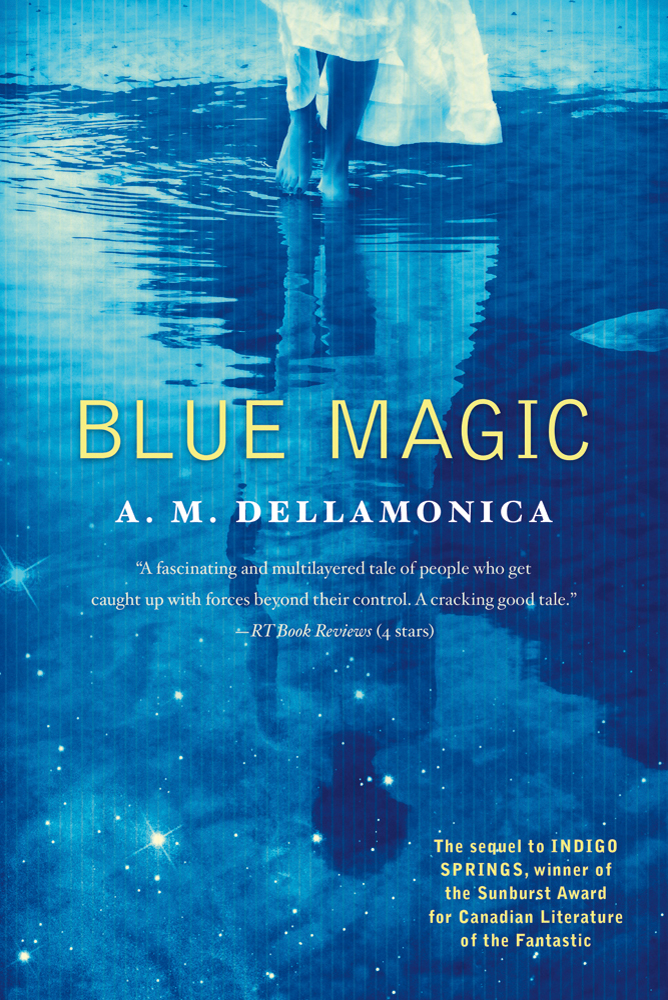 Blue Magic by A. M. Dellamonica is the sequel to Indigo Springs, which, in case you have forgotten, I loved. Indigo Springs was absolutely fascinating to me, and I really loved the slow emergence of Astrid’s back story and the explanation of vitagua (liquid magic). As soon as I finished it, I was eager to pick up the sequel, but it ended up not being exactly what I was expecting.

It reminds me, to make an odd comparison, of when I was a kid and first read the end of the fourth Harry Potter book. What was with all this Voldemort stuff? I wanted more Hogwarts shenanigans! More lighthearted boarding school adventures! What was with this sudden dark wizard politics? Of course, once I read the rest of the books, I realized that that’s the whole point of the series. It wasn’t sudden at all, it was exactly what had been building all along. But I was so used to the playfulness and small scale of the first few books that I balked at the larger picture. I had a similar experience reading Blue Magic right after Indigo Springs.

Just like the Harry Potter series, I can see in hindsight that of course Blue Magic would have a much larger scale than the first book: Indigo Springs begins with vitagua already infecting the world, and Astrid’s story is just back story to explain how they got there! Still, haven been totally drawn into the dynamics of Astrid, Sahara, and Jacks, I was thrown by the giant cast of characters in Blue Magic. Although Will is the narrator of Indigo Springs, he doesn’t play a large role in the book, but he takes a more major role in the sequel. Along with Astrid and Will, there are two other characters that get their own points of view featured at different times. There are three different realms (the dream world, “fairyland”, and our world), four major factions (Sahara’s, Astrid’s, Fyremen, and the government) the  and tons of minor characters and subplots.

Astrid’s major love interests in this book are male, and to show a bias I’m sure you’ll be shocked by, I was therefore less interested (though there is another lesbian main character). There is a trans character in this book, however (whose representation I was iffy about in the first book, but more comfortable with here), and First Nations characters, though I’m not sure how I feel about their representation. There doesn’t seem to be a lot of acknowledgment of different Nations of people, and I can’t help but feel that having most of the Native characters be half-animal is not ideal, though it does make sense in context. I really am not sure about using First Nations people to advance the plot of the series without really having any be main characters… I feel like I would have to discuss this with someone to sort it out.

Mostly, though, I was just thrown by the sheer amount packed into this book. I feel like this could have easily been three books instead of two, though I do appreciate not padding the series. There are so many characters, so many different settings, so many subplots and chantments that I was a little overwhelmed. I missed the more personal interactions from the first book, and Astrid’s slow re-discovery of knowledge about vitagua. This isn’t a bad book, it’s just a very ambitious one. And I don’t think it failed, I just personally didn’t respond to it as well as I did the first book in the series. I am determined to re-read it at a later date, though, because I’m sure that just like Harry Potter, I will be much more willing to dive in to the bigger picture the second time around. 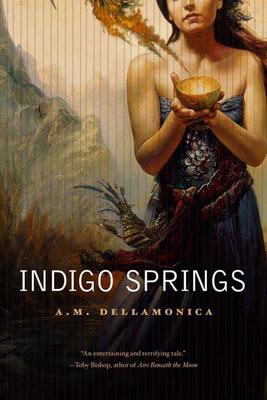 I really loved this book! Indigo Springs is a Fantasy novel set in our world, but after magic has contaminated it. Magic is a powerful and poisonous force that causes people and plants to mutate, though it can also be channeled into objects that perform specific magic tasks. Astrid’s best friend Sahara has creates a cult around herself and the magic. The cult is causing destruction, including earthquakes, and just keeps growing. The government is desperately trying to get things under control, and is questioning Astrid in jail to try to find out Sahara’s weaknesses, and how it came to this. Meanwhile, the magic in Astrid’s body makes it hard for her to tell the past, present, and future apart.

I was so taken in by this book, and very grateful that I have the sequel to start right away! The book starts at the end, when everything has gone wrong, and then explains how it got to this point. Somehow, knowing the ending doesn’t make it any less dramatic. I was totally engrossed in the explanations of how magic works, how Astrid channels it, and the mysterious background of her father. Astrid is bisexual, which is not glossed over, but not made a big deal of, either. The love triangle in the novel actually makes sense to me, and wasn’t overly dramatic.

The writing is great, the story is compelling, and the characters are interesting. You can’t help feeling for Astrid as she pines over her love interest/best friend gone bad. I thought the backwards storytelling technique worked really well for the story. Also, because the novel is set in our world, I think Indigo Springs would be interesting to people who aren’t familiar with Fantasy novels as well as people who enjoy the genre. The concept of chantments, enchanted objects, is especially interesting. And, the magic is all balanced with drawbacks, which makes it seem believable.

I really recommend this one. It’s been a while since a book has completely drawn me in like this, so I keep thinking about it after I have to put it down. Indigo Springs is definitely going into my permanent collection.