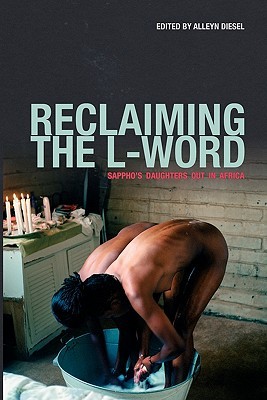 Reviewing this book was a decision I kind of hem-hawed about with, mostly because it’s about lesbian-identified women in/from the African continent, and as someone who’s never been to the African continent or anywhere close, I felt like yes, I should probably leave this one alone since these are experiences I could never really claim, and wouldn’t try to. But having read it I feel the real need to review it, to get out there that this is a really amazing, touching book and I think it can speak to anyone on any level.

It’s a non-fiction set of autobiographical stories, which is the first thing that attracted me to it. To see women, lesbian women, telling their own stories and having them published is still a rarity, and as a lesbian I always want to know more about what other lesbians all over the globe are going through. There’s this common theme in all our stories, and at the same time I’m upset to see anyone else go through the same pain and heartache, it’s comforting to not be alone. One thing to keep in mind is how very different every experience is, and I think this volume shows that well. There are women who identify as lesbian and women who do not, there are transgendered women, there are women who received support from their families and women who did not. Some women are from countries where discrimination against them and their partners is illegal but unenforced, some are from countries where discrimination is not only legal but societally encouraged as well; some of them were pulled out of the closet and some of them came out themselves. All of them hit home with me, and by the end of each woman’s story I felt like they’d been speaking directly to me personally.

These stories are real and heartfelt in a way that really brings them home, exactly the way I was hoping when I picked this book up (or opened its PDF, if you want to get technical). It isn’t something that you have to relate to in order to understand where these women are coming from, it’s very approachable and for that reason I think it’s a fantastic volume, a read that I would recommend to anyone.

My absolute favorite part of this book is the poetry by Mavourneen Finlayson throughout the whole text, in between most of the pieces. It brings together whatever pain or hope each piece put forward or makes you feel, kind of smoothing everything over and cleansing the palate for the next part. Her poems are all amazing and unique, and often I find in poetry that anything queer is a surprise, but in each of hers it’s latent throughout the whole poem, no matter its length. Her poetry brings the whole theme together, I think, in that the theme is exactly what it’s stated to be: reclaiming the L-word, by, for and about Sappho’s daughters Out in Africa.