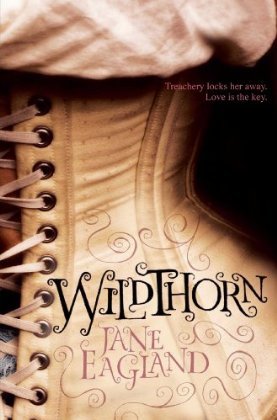 A nineteenth-century insane asylum seems hardly an appropriate place for a teenage lesbian romance.  Jane Eagland, though, manages to make this both believable and exciting in her young adult novel, Wildthorn.  This historical tale is not just a romance, though that was my favourite part; in fact, a larger portion of the book is dedicated to interrogating some of the atrocious Victorian social attitudes to mental illness and gender non-conformity.  The “isn’t-it-horrible-what-they-did-to-women-back-in-the-day” is a bit heavy-handed and reductive at times, though; what bothers me mostly about this is the implication that nowadays women are ‘free’ from sexism.  Actually, what I found remarkable —and at the same time depressing, of course—is how certain sexist belief systems, like victim-blaming, are at work in this fictional Victorian universe and are still alive and well today, albeit in different forms.

So the novel deals with some pretty serious issues, and it’s not as light as you might imagine; or, at least as I imagined when I picked it up wanting a cute, melodramatic romantic thriller.  Louisa Cosgrove is from a middle-class English family and she’s, of course, exhibiting all the typical signs of baby dykedom: she wants to follow in her father’s footsteps and be a doctor; she has no interest in feminine pursuits like needlepoint and pointless social calls; she has very strong feelings for her older cousin Grace.  While her life is already in shambles following the death of her father, Louisa ends up being sent to Wildthorn asylum, and you’re left in suspense for most of the book as to how or why this happened.  Was it her jealous, underachieving brother who orchestrated this?  Has she been mistaken for someone else?

The novel is a bit of a slog in the middle section, where Louisa is trapped in the asylum; this is how Louisa feels, of course, so on the one hand Eagland is mirroring Louisa’s experience.  On the other, it gets a bit tiring, and depressing.  Once the romance picks up, though, the book gets pretty exciting; plus there’s the whole issue of how she is going to escape!

If you love Sarah Waters and have already plowed through all her books, I would recommend picking up Wildthorn.  It’s an obvious connection to make, but I really think Eagland nails the same kind of Victorian melodrama that Waters does, in the spirit of some of my favourite nineteenth century British writers.  I love how a lot of the chapters end with a dramatic cliff-hanger, such as “It’s all been in vain, I’m going to die…”. The dot, dot, dot, of course, is key.  Unlike Waters, though, because Wildthorn is a book for teens, you don’t get the fun racy sex scenes.  But it is a little more explicit than the original Brontës, so there’s that, and it might tide you over until Sarah Waters’s next book is out.

Also, if you want feminist historical young adult fiction set in Victorian England, I highly recommend Libba Bray’s Gemma Doyle series, which has some paranormal/fantasy elements as well as an awesome lesbian character!