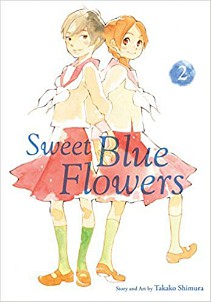 Sweet Blue Flowers Volume Two by Takako Shimura expands Fumi and Akira’s worlds a little more; it covers the summer holiday and their move up to second year in school, with all the attendant new people that comes with it, as well as the fall-out from Fumi and Yasuko’s relationship ending.

The art continues to be very cute, especially with the addition of new students to the established friendship groups! The kids look believably young, which is adorable, and I really appreciate that! (It can be a little confusing to keep track of who’s related to who, however, which I’m not sure is a fault of the art.) And it continues to have more realistic reactions to things than I expect from manga – Fumi is completely understandably upset with Yasuko, and the ways it manifests feel sadly plausible (such as her need to prove herself in Sugimoto’s shadow)! Akira’s confusion about sexuality and relationships also feels completely genuine, considering her age! I like that a book whose drama hinges entirely on relationships makes it clear that Akira not knowing how she feels about them is fine! (It also specifically discusses the different expectations the girls have for relationships, which is a lot more frank than I expected Sweet Blue Flowers to be, especially considering the girls’ ages. It’s probably good that it is frank, because yay for modelling discussions? But also: wow, I did not see that coming.) And on the topic of realism: the “obligatory clueless person putting their foot in it” in this volume is played by a first year who is Earnestly Concerned about her unmarried sister and the friend she lives with. The scene where she’s trying to talk about it to Fumi, who visibly has no idea how to react or what she can reveal about her own queerness was hard to read, but it felt really familiar.

The side-stories in this book are a little more central and tied into the main plot than in volume one; there’s a relationship that actually lasts into adulthood, there’s more unfortunate teenage crushes, and there’s something of a train-wreck relationship that everyone involved acknowledges is a bad idea. I like that it shows a variety of relationships – there’s healthy and unhealthy relationships, reciprocated feelings and not, and seeing Sweet Blue Flowers show so many different ways relationships can work out makes me really happy!

In conclusion, it’s still a good series and I really need to know where it’s going next, because I just want all of these girls to be happy!