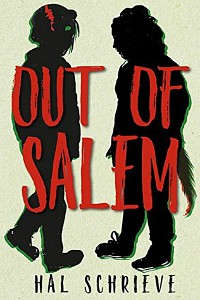 When I saw that cover and read the blurb, I was ready for an epic queer urban fantasy adventure. I mean, doesn’t that just sound badass? Two fourteen-year-olds: a nonbinary witch zombie, and a Muslim lesbian werewolf. I have read many urban fantasy books where the supernatural creatures live in secret, so I was excited to see this book went in another direction, one I’m always eager to read more of: a world where supernatural creatures live among humans and are regulated by rules and laws. It’s always interesting to see how intertwining the two worlds changes them both.

Out of Salem is unique in that regard because instead of human, the default seems to be witches, with only a small percentage of the population being nonmagicals. Werewolves, zombies, selkies, shapeshifters and other creatures are minorities that have limited rights which vary in countries or time periods, just as with real life minorities. I loved all the little details, like the ways to become a zombie, the casual mention of prophecies, or shapeshifters being able to marry any gender in certain countries.

So, for the first part of the book, I was getting what I signed up for: a really well-built and interesting urban fantasy world in the ’90s that incorporates supernatural creatures into real-world history and culture. And I loved it. Then, it gradually got a little too real for comfort. It’s as if the book was asking the question, “hey, you know what’s scarier than zombies and werewolves? Reality!”. (A little like that Doctor Who episode with the spiders and the gun-loving white guy.) As I kept reading about horrible bullies, racist rallies, police brutality and windows being broken for the owner supporting minority groups, it was difficult not to think about how many people go through all this stuff daily. Z and Aysel having to sit in class while the teacher talked about how dangerous their kind is, and Z reading a book by a guy who thinks all zombies should be killed in horrifying ways reminded me of too many similar situations I went through for being a queer person.

There are many fantasy books that use supernatural creatures as metaphors for real-life oppressed groups, while using all white and allocishet casts. What made the metaphor in Out of Salem really work for me is that while Z, Aysel and the others are persecuted for their supernatural traits, they are also minorities in real life. Z is nonbinary, Aysel is a lesbian, and major side characters include an elderly lesbian, a Black Jewish teacher, and several transgender werewolves. While the main focus isn’t on these real-life traits, they are still mentioned: the older lesbian expresses joy that Aysel is able to come out so young, Aysel draws a parallel between being a “good werewolf” and her mother being a “good Muslim”, and it is made clear that Mr. Weber is risking a lot more as a Black Jewish person than one of his more privileged colleagues might.

All in all, I consider Out of Salem a wonderfully well-written book with great world-building and characters. I loved the little group that formed by the end, and how they gradually became closer to each other. I loved that Aysel and Z gravitated towards each other not only for both being monsters, but also both being queer. I loved Z explaining their identity, how both they and their friends were kind of awkward and unsure about terms, but not malicious by any means – the way you’d expect 14-year-olds in the ’90s to be when they have few queer adults to look up to or to learn from.

My only real complaint is that I found the ending too open, and since I saw no indication of this being a first book in a series, I was a little disappointed. I wasn’t sure how I expected all the plotlines to be wrapped up neatly, but this was still a let-down.