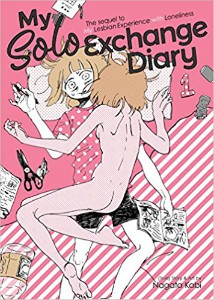 Nagata Kabi’s My Solo Exchange Diary Volume One is a follow-up to her hit autobiographical manga My Lesbian Experience With Loneliness (which I reviewed in June!). It is an autobiographical essay collection talking about her depression, her attempts to leave home and gain her independence, and her relationship with her family; and it is harrowing. Compulsive, excellent reading, but it left me feeling like I’d been hit by a truck afterwards.

It’s a very introspective series of graphic essays, where she talks about her realisations in the past month and the work that she has done on her own well-being. Sometimes this means that the essays meander a little, and sometimes it means that they’re laser-focused on one issue, like having to be confident in her own identity before she can let herself be influenced by others. The art style is still the same as in My Lesbian Experience With Loneliness, so it’s still cute and cartoony, but the contrast between that art style and the subject matter alternates wildly between making things more bearable and making things harrowing.

If anything, My Solo Exchange Diary is even more clearly and explicitly about Nagata Kabi’s loneliness, despite it being about her search for connection and friendships! It analyses her support network (which… Isn’t really a network), and how unsupportive her family is, not just of her as a creator, but of her as a human being, and that is rough. (If you remember in My Lesbian Experience With Loneliness, how she said that she had the classic traits of someone who was abused as a child despite not being abused? Yeah, about that.) She’s also frank to the point of cruelty about her own self-harm and suicide attempts (which she mentions not necessarily casually, but almost as a background detail for what’s going on) and readiness for relationships, which means that the end of the book is really hard to bear! To the point where I just had to put the book down and stare into space for five minutes to process how it was making me feel.

The first volume of My Solo Exchange Diary is a beautiful, gutting read. If you liked My Lesbian Experience With Loneliness then it is definitely worth picking up, but it is a lot rougher emotionally!