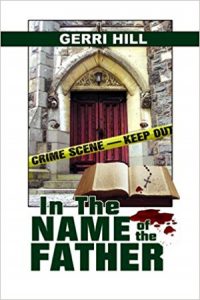 In The Name of The Father by Gerri Hill is the sequel to her 2007 novel Hunter’s Way (which I reviewed here at the Lesbrary!), with Hunter’s newest case being investing the murder of a Catholic priest, complicated by publicity issues, homophobia, outside interference, and the attempts to bury any suggestion that the victim may have been in a consensual gay relationship.

In The Name of The Father is… Definitely not as enjoyable as Hunter’s Way, but it does have plus sides. For example, there is less onscreen rape and transphobia here, which I will take as a win. It does also resolve the potential issues that come from Hunter’s and her girlfriend Sam being work and romantic partners. (This solution does manage to effectively sideline both her and one of the two named PoC on the main cast, which isn’t a great look.) The fact that Tori and John (one of the other detectives) have mellowed in the year since Hunter got together with Sam is also a nice touch, although it might disappoint people who were enjoying an angry, aggressive heroine. Plus, In The Name of the Father introduces a new detective, Casey O’Conner, who is smart and energetic, and who I find quite charming! The way that this book expands the cast and its focus works quite well for me, especially because seeing how all of the different characters react to the PR manager for the church is really interesting.

I think that the relationship are quite well-handled too, and quite different – Hunter and Sam are an established couple, very much in love, having to deal with being separated for the first time since they got together and the insecurity that comes from that, while’s Casey’s romance is much more focused on the physical side of things. Plus, the friendship between Hunter and Casey is pretty great.

However, I have so many problems with the constant attempts to cover up and dismiss the murdered priest’s life, both on the part of the church and on… Pretty much anyone who is not a police officer? If you have hit your limit on how much pearl-clutching you can deal with, I would give this one a miss, seriously, especially as there’s some really repugnant views expressed (Like bringing in Casey from the Special Victims Unit, to give the impression that the victim wasn’t in a relationship). I’ve also mentioned that the way this book handles its PoC bothers me; one character is sidelined with Sam, one barely gets any lines, and and rest I feel are handled quite stereotypically.

As a note: I found that the ending just didn’t hold together. Without spoilers: I like denouements where the villain’s master plan is revealed, but the way that In The Name of The Father handles it is infuriating. The way that the mystery shakes out makes everything that led to it feel entirely wasted! The way that the book itself ends feels like the narrative was trying to have the moral of “You can’t beat the system” to go with Hunter’s storyline, while also having emotional catharsis, which means that doesn’t deliver either. Your mileage may vary!

On the whole, I’d say that it’s worth picking up if you enjoyed the previous book, but it has some significant flaws to be aware of!

Caution warnings: constant consideration of sexual abuse and rape, mentions of child abuse, homophobia (in the church and out of it).