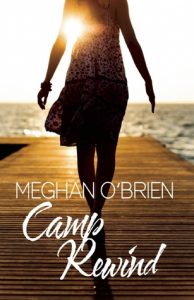 I’ve been excited to read Meghan O’Brien’s Camp Rewind since I first read the synopsis last year. A book about two women of color dealing with very real and contemporary problems like social anxiety and online harassment and misogyny? Sign me right up!

Despite my excitement for the book, it somehow got pushed back due to my own real world problems. But when I found that I had a few Audible credits to use up, I grabbed the chance to listen to a good book.

It’s been a while since I’ve listen to a book because I’ve lost some of my hearing and can only listen in quiet rooms. However, I had a really great experience listening to Camp Rewind and might just give it another listen again soon.

Alice Wu and Rosa Salazar meet at the titular Camp Rewind, a camp for adults who want to unwind for the weekend. However, the heroines both have other reasons for being there. Alice has extreme social anxiety and wishes to expand her social circle, so she applies for camp at her therapist’s request. Rosa, however, just wants to forget who she is for a little while after publishing an article about a video game that some men took offence to and decided to ruin her life over. The two meet and connect right away, entering into a “what happens at camp stays at camp” sort of relationship. Soon, they must deal with feelings that weren’t supposed to happen.

I should probably warn that this book contains a lot of sex. It’s all very well-written and didn’t feel out of place to me, especially given the way O’Brien describes their connection and Alice’s desire to finally be with a woman and her finally coming out as a lesbian.

There is also a lot of pot smoking and mentions of rape threats and other threats of violence against women, though I don’t recall it going into too much detail.

Alice and Rosa fall for each other very quickly in the novel, which might be a genuine concern for some. However, it felt organic to me. They were exactly what the other needed. Not that they needed to be in a relationship to grow as people, but that they needed someone to support them and be there for them, something they each lacked in their lives.

As someone with anxiety, I can honestly say that O’Brien does a great job crafting a mentally ill character. Alice never overcomes her anxiety. It’s always still there, even when she’s pushing herself to be braver, to do things that scare her because she wants to help or to be with Rosa. The relationship doesn’t magically cure Alice of being mentally ill. She still has her bad days and is a work in progress.

The most interesting aspect of the novel is O’Brien’s feminist critique of online harassment, particularly towards women in gaming and the men who disagree with and subsequently harass them. She doesn’t get too preachy about her opinion of them. She doesn’t have to, letting it show through Rosa’s character and the growth she experiences as someone who lets herself believe she isn’t worthy of love and affection to someone that embraces it.

If you enjoy books about characters who are allowed the room to grow and develop, books about women of color who are given agency, books with delightful side characters, and books with feminist themes, I highly recommend giving Camp Rewind a shot.