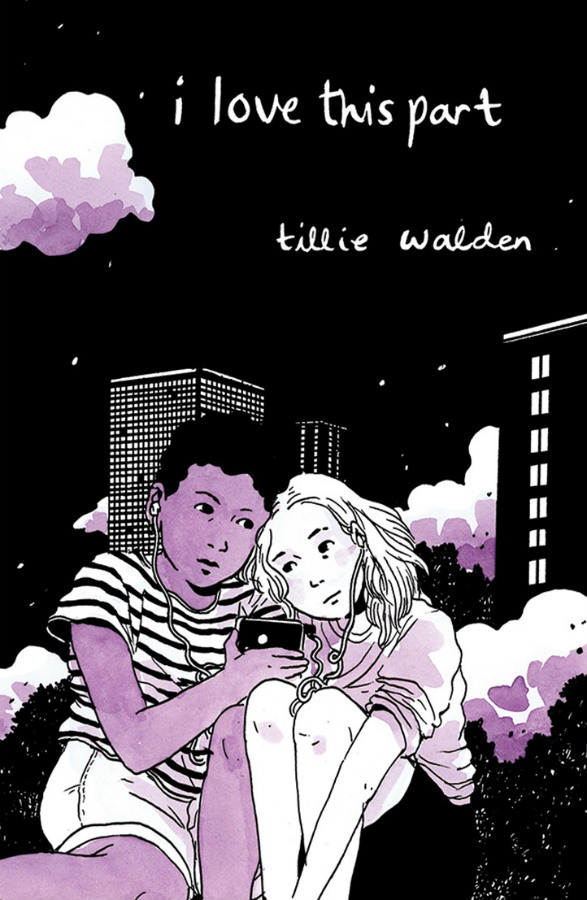 i love this part is a graphic novel by Tillie Walden, which effectively serves as snapshots of the romance and relationship between two American schoolgirls. It was described to me as a sweet queer romance… Which is half right.

For the most part, it’s simple and straightforward. The two girls are in love, and spend their days doing homework together or listening to music and playing on their computers and talking about their families and hopes for the future! There are some really interesting style choices here though. For example, the girls aren’t actually named for most of the book; I’ve been calling them Elizabeth and Rae based off a panel showing Elizabeth’s email inbox towards the end, but that might not actually be right. The spelling and capitalisation sometimes becomes text-speak during dialogue in a way that I think is deliberate but can’t be sure of. But the format of the story is what’s really novel; it’s not structured as a traditional comic! It’s a collection of one-page illustrations that tell a story individually and sequentially, and by necessity it’s done slowly and in pieces.

On the topic of the art; it’s pretty good! It’s predominantly monochromatic, with purple or grey washes for colour. The application of colour feels thematic to me — the flashbacks to how Elizabeth and Rae met and grew close are in grey, with more purple creeping in the closer they get to each other. The backgrounds are really well done; whether it’s nature or buildings, the backgrounds are really detailed and well put together. The art does some really cool things with scale as well — when Elizabeth and Rae are happy and together, they’re drawn like giants, doing their homework against the rooftops of buildings and leaning against mountains to listen to music. It read to me as a good visual way of representing how much bigger their emotions make them feel, or possibly how everything that isn’t them seem smaller and less important. (I have to admit, I really enjoy how, despite there being no other people visible when the girls are together — there are people before they get together, but after that they’re a world of two — the art still makes them feel like they’re part of the world; this change of scale and positioning contributes to that.) The way that both girls seem to shrink or the world gets bigger as the story goes on is such a good continuation of this theme. And the use of empty or silent panels (landscapes with no people, or panels of the girls not talking) works well to show time passing and contrast the spaces Elizabeth and Rae filled with each other.

Where the Much of the characterisation is handled in the same way — we learn that Elizabeth is Jewish, for example, and Rae has a stepmother she doesn’t get on with, that both of the girls play music and love instruments — but that information is parcelled out in dribs and drabs. They’re both believable teenage girls! And their love for music is really clear, even though we’re not told what music they listen to; it’s not like The Less Than Epic Adventures of TJ and Amal where the songs they’re listening to are as important as what’s going on in the page, but music is part of how Elizabeth and Rae bond and relate to each other and show their feelings, and it’s really cute.

But I need to explain that “half right”, don’t I. There will be spoilers from here-on out, I’m afraid, so for anyone who wants to go into the book mostly unspoiled: I have some mixed feelings about this book, based on the second half of it, but everyone lives. Most of it is the very sweet, peaceful story with a cute romance that I was promised! I just don’t think that the last third of it lives up to that.

See, about a third of the way through, cracks start showing in Elizabeth and Rae’s relationship. There are panels where neither of them appear (the time passing that I mentioned earlier), or where they fight about boundaries. There’s a panel where they ask each other “Do you think we’ll ever be able to tell anyone?” and conclude “Probably not,” There are panels of Elizabeth waiting for Rae, asking if she’ll be there soon — and Rae never replying. All of which culminates in Rae breaking up with Elizabeth.

Points to Tillie Walden; the way that she handled the relationship and its ending is wrenching. The panels of them arguing, and the panels of them after the break-up are genuinely affecting and thoughtful. Tillie Walden makes good choices with how she handles it; both girls are clearly broken-hearted, even Rae, and the choice she made to have the pages of them at their happiest while they were together facing the panels where they’re sobbing after they’re broken up is really effective. (Yes, guess where the titlular panel falls.) Plus, everything about it — including Rae sending a mixtape! — rings as plausible to me. But for however well it’s handled, I have two major problems with this. The first is that I am really ready for people to stop trying to sell me on queer romances where the main couple don’t make it to the end for whatever reason. We did our time on that trope, I am ready for it to be laid to rest! The second is why they break up.

See, Rae instigates the break-up because “I’m not… Like you. This — this is wrong.” And even if it’s later clarified a little more (I’m sorry. I didn’t want to hurt you. but im just not ready for this rn” [sic]. And for some reason — perhaps the space of format of the book was a limit — that’s just… Left there. There’s no rebuttal, there’s no exploration, there is just a teenage girl whose internalised homophobia is cutting her heart to ribbons, and the story leaves her there. No matter how well i love this part handles everything else, that is disappointing.

I honestly have difficulty summing up how I feel about this one. On a technical and emotional level, I can’t fault it. The art and the way it handles its characters emotions are pretty good, and I really enjoyed the way it presented the story it was telling! However, the story that it was telling was one that is really familiar to me in its beats and structure, and no matter how well done it is, I’m not sure I need that story again.