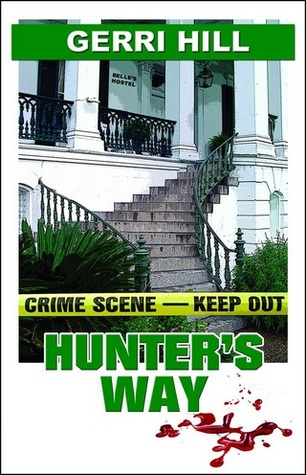 Hunter’s Way by Gerri Hill revolves around two homicide detectives: Tori Hunter and Samantha Kennedy. They are the classic opposites buddy-cop duo: Hunter is aggressive and antagonistic, burning through six partners in seven years but apparently being a good enough detective alone to make up for it. Samantha Kennedy is on the surface a much more personable officer who has to juggle a new job, a demanding boyfriend, and Hunter.

There are a lot of moving parts to this book; the relationships between both Sam and Tori and Sam and Robert, a suspected terrorist attack, drug busts, and a serial killer attacking young lesbians. With so much going on, it’s only inevitable that pacing seems a little odd – beats of the crime that you’d expect to have more resonance or time spent on them (for example, the death of a named character who had been helping the investigation gets barely a page and is never mentioned again), and some scenes are repeated over and over (such as Tori’s emotional conflict about getting close to Sam, or Robert’s constantly contacting Samantha and saying he’ll take it to dinner.). I appreciate that the former is presumably to make room for everything else, and the latter is to emphasis how terrible Robert is as a partner, but taken together it seems odd.

The pacing does leave enough room for Sam’s slow realisation of her own sexuality, which I appreciated a lot. Sam trying to work out her own feelings by talking to people and reflecting on what she wanted seemed quite reasonable and realistic to me, even if some of the responses were disappointing. It especially entertained me that some of Sam’s ideas about lesbians appeared to be quite stereotypical; there’s a scene where she has to go undercover at a gay bar, and her idea of appropriate wear is mostly her normal clothes, but no bra; other people’s feelings may vary!

I like the way the relationship between Tori and Sam builds as well; they have complementary skills, and once they start bonding (over escaping from armed men!), I enjoyed reading about them getting closer. The characters of everyone who isn’t Tori, Sam, or their commanding officer are left a little sketchier though; even some of the plot critical characters like fellow detectives Adams and Donaldson are given only the barest scrape of personality. I don’t feel like the mystery seemed to be handled quite as well; the resolution seemed rushed and the escalation to be very sudden; there are quite a few revelations that could have been seeded into the story before the last couple of chapters, and that might have evened the pacing up a little and given some of the blander characters a little more depth.

(Or a related topic: all of the murder victims are queer. There are a number of young lesbians who are murdered, and a trans person is murdered and the investigation is handled badly. Please bear that in mind if you’re going to read it!)

SPOILERS AND CAUTION WARNINGS IN THIS PARAGRAPH: Sam is raped in the middle of the book, and I’m not going to lie: it’s not great. I can’t shake the impression that it was put in as a way to establish that Robert is an awful human being (his immediate response is to make her rape all about him and his feelings, I hate him.) and force Tori and Samantha to get closer. I feel like the same effect could have been achieved from the scene where Tori getting shot? But on the plus side, no one suggests that the attack on Sam has anything to do with her lesbianism, which is something that I was braced for all the way to the end of the book.

Hunter’s Way is mostly enjoyable; it’s a queer police procedural, and that’s what I want. It’s the first book in a trilogy, and I’m very excited to read the rest of it!

Caution warnings: murdered lesbians, there are some transphobic comments and police mishandling of a trans person’s murder; onscreen rape.

One Reply to “Susan reviews Hunter's Way by Gerri Hill”