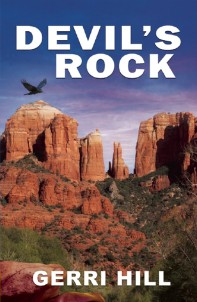 Gerri Hill’s Devil’s Rock is both the beginning of a new series and the resolution of a storyline from her Hunter series (which I reviewed here at the Lesbrary: Hunter’s Way, In The Name of the Father, and Partners). Unfortunately, I don’t think I can do this review without spoiling some of the events of Partners, so please bear that in mind!

Andrea Sullivan is a small-town police officer, confident that nothing as terrible as what happened to her in LA can happen in Sedona… And then the murders begin, because a serial killer who escaped the police in Dallas is using Sedona as his dumping ground. FBI Agent Cameron Ross shows up with her own set of issues, a kitten, and a motorhome full of FBI supercomputers to help figure out where he’s going to strike next.

The story itself was interesting, and it was nice to get some closure on the case from Partners, but some of the developments specifically about the murderer I just found myself just going “No. She can be serious. WHAT.” at, because they read as soap-opera style out-of-blue tricks of convenience, rather than actually feeling organic to the plot of either book. There are parts that are tense and dramatic, but an equal number that appear to have been set up for things in the sequel (such as mentioning that the motorhome is an electrified mobile fortress, which you’d expect to be tested at some point! But alas, no.) Although, I admit, I did periodically have to check when this book was published, because the idea of having to drive a computer around – not a crime lab, or anything else that would require you to be on the scene, an actual computer – seemed like something out of the eighties.

The thing that probably bothers me MOST about this is the way that Cameron Ross treats Andrea Sullivan. It’s not just aggressive flirting or posturing, although it contains that; at one point, Sullivan says that she doesn’t want to talk about her past with Ross, so Ross not only orders an FBI background check, but taunts Sullivan with it and blames her for it in a shocking display of “well if you’d just done what I wanted, I wouldn’t have invaded your privacy.” She’s like that about their relationship too; Sullivan says she’s not interested in kissing her, but Ross refuses to accept that because obviously she knows better. And worst of all, even though Sullivan repeatedly calls her out as a bully, it’s all for naught, because the narrative consistently rewards Ross with whatever she was bullying Sullivan for! Yeah, sure, Ross apologises, but ugggh. It doesn’t help that after Ross gets the files on Sullivan, Sullivan obviously stumbles across them and reads them (because of course) and the conversation ends with her apologising for invading Ross’s privacy. I get that it could be the narrative trying to model behaviour for Ross, but it was aggravating, and made it hard to accept the romance as a happy thing.

Devil’s Rock is a fine set-up for a new series, but I didn’t enjoy most of the romance tropes it used. That outweighed the mystery aspects, so I don’t recommend it.

One Reply to “Susan reviews Devil’s Rock by Gerri Hill”