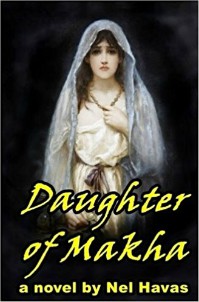 I look across the years in astonishment, for in the distance I see a simple, trusting girl. She is a stranger to me, yet she is familiar; her land alien, but it is mine. In unbroken chain, hand-in-hand with ghosts of myself, over the days and the hours, over years measured in heartbeats, I am linked to her.

Daughter of Makha is a retelling of the biblical story of the epic of Absalom (2 Samuel 13:1-19). In the original story, Tamar, daughter of King David, is raped by her half-brother. When her father does nothing to punish him, Tamar’s mother and brother plot revenge (and attempt to seize power), which tears the family apart and leaves a large death toll. Tamar serves only as a catalyst n the narrative, disappearing quickly after that. Daughter of Makha expands on this character, exploring what this must have looked like for Tamar, who is trapped in a family tearing itself apart.

This is the third of Nel Havas’s books that I’ve reviewed at the Lesbrary, and although this book departs from the Ancient Egypt setting of the previous two, I can see the parallels in these stories. Like her Egyptian novels, Daughter of Makha has a matter-of-fact writing style and features thorough research–though sometimes that research veers into info dump territory, describing every road the characters take and its landmarks, or dropping in some historical story that doesn’t quite match up with the narrative.

All three books also feature court intrigue and elaborate plots to gain power. The women, especially, in these novels scheme to gain influence. They may not have a lot of legal power, but they use the resources available to manipulate their circumstances, whether it’s to shore up power, peace, or protection for their family. Makha and Bathsheba are the principal players here–both wives of King David, both trying to ensure that their son becomes the heir. But they are not the only women using whatever influence they have: Tamar spends the novel trying to turn the course of history, attempting to prevent bloodshed. I was especially impressed by the quiet shrewdness of Shoshana, who finds a way to protect her (and Absalom’s) sons no matter the outcome of the war.

Although it is the wrong against Tamar that launches this war, she is horrified by it. She doesn’t get a say in her mother and brother’s revenge plan, and it becomes obvious that they are acting for their own gain more than any attempt to defend her “honor.” I thought that Havas captured the terrible and engrossing power of war. Tamar is continually disgusted by her loved ones’ blood lust, but the battle is brutal and bloody and giddy—it inspires a morbid fascination.

As for the queer content, it comes in about half way through the book. Hana is a few years older than Tamar and has acted as a pseudo servant/caretaker/surrogate sister role at various times in Tamar’s life. They are reunited after a long separation, and they travel together to try to prevent the final battle. Hana crossdresses, disguising herself as a warrior to defend them from any conflicts on the road. Their relationship has subtly shifted; they both seem to have grown since they were last together, and they see each other with new eyes. I did like the slow build of their relationship—the tentative flirtation—but I wish there was a little bit more of it. [spoiler] Specifically, I wish there was more detail of their relationship from the end of the battle to their happily ever after. They seem to kiss for the first time, separate… and then a while passes and they’ve grown old together. I’d like to see more of their fumbling first steps in their relationship. [end spoiler]

And, of course, I have to mention their donkey, Pimi. Pimi is with them on their journey, and she’s an adorable animal sidekick.

I do have some criticisms, however. Like Nel Havas’s other books, I think the strength of the story is in the ideas and broad strokes. It could benefit from more intense editing. For instance, some paragraphs are a few lines, while others take up more than an entire page. Although overall I though the second half of the book was more interesting, some of the travel could be condensed, especially by not describing every single road they took. I was also surprised that [spoiler] Ahithophel’s suicide is casually mentioned and isn’t really a plot point.[/spoiler] Also, I know this is based on a Bible story, so arguably you can’t really “spoil” the ending, but on page 300, right before the final battle begins, the narration gives away who wins the battle, which takes away some of the tension in the moment.

And finally, a few warnings. This is based on a Bible story, but it is from an atheistic perspective. Characters (especially Makha) scoff at these beliefs, and there doesn’t seem to be any character who is religious and also a good person. I will also include a trigger warning for Tamar’s rape, which is described in some detail.

I am not a religious person, so I was not very familiar with this story, but reading the Bible story and Daughter of Makha back-to-back was a very interesting experience. I appreciated how Havas gave Tamar (and the other women of the story) agency, even when they were restricted by both misogyny and story constraints.