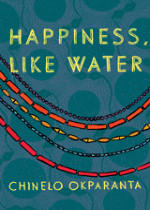 It’s perhaps best to begin with the fact that happiness you won’t find much in Chinelo Okparanta’s short story collection Happiness, Like Water.  After all, as one character points out, happiness is like water if “we’re always trying to grab onto it, but it’s always slipping through our fingers.”  What you will find, however, are some tenderly written stories about Nigerian women, sometimes in the US or in Nigeria, grappling with the demands made of them in a racist, sexist, and homophobic world.

If that sounds depressing, well, maybe it is; it’s important work that Okparanta is doing, investigating the myriad of ways in which her characters are bound by a limited set of choices in a world that often doesn’t value them; however, she does have this to say in an interview with Saraba magazine: “in some ways I write about what is positive. I write about brave and ambitious men and women. I write about intelligent people. I write about kindness, about love. I write about people who, like me, are trying their best to make sense of their lives within the societies in which they find themselves.”  In this way, I didn’t find Happiness a sad book, despite the often bleak subject matter.

Okparanta writes simply but beautifully, something which also helps break the sometimes gloomy circumstances in which her characters find themselves.  It is also not a collection without hope.  For example:

And I think perhaps all this will do. The waterfowls are still quacking, and the sun

is high in the sky.  The river is still glowing in shades of silver and gold.  Grace

is sitting next to me, and I can’t help thinking that perhaps the verge of joy is its

own form of happiness.

This is an unrepentantly feminist book, dealing with issues such as shadism, beauty standards, domestic violence, gender roles, class, and queer [and straight] sexuality.  Happiness doesn’t feel like an ‘issue’ book, though, I think because the voices of the women play such a big part in the stories.  My two favourites, “Grace” and “Story, Story!” in particular, featured palpable, unique voices.  “Grace” is narrated by a middle-aged divorced woman who’s a (English?) professor teaching a course on the Old Testament.  It’s not clear exactly what her beliefs are, but it seems like she’s some kind of Christian, or maybe has a Christian background.  The story centers around her relationship with a Nigerian student, definitely a Christian and grappling with her sexuality and what the Bible (supposedly) says about queerness.  I thought Okparanta nailed the world-weariness of this older woman’s voice, as well as the youthful one of the younger woman.

“Story, Story!” is, I think, the strongest in the collection, and probably features the voice that is the most different from the rest of the narrators.  I don’t want to spoil this climatic, powerful story by giving away important details, but it is a chilling narrative about the lengths of insanity to which women can by driven by the white heteropatriarchy.  If there were one part from this book I would want everyone to read, it’s the brilliantly titled “Story, Story!”

Despite the innovation of those two I just discussed, several of the other stories featured women whose voices began to run together a bit for me by the end of the collection.  There were a lot of middle-class women who were teachers, which isn’t in itself a problem, if the voices are differentiated; however, I didn’t find that to be the case.  This is a fault I’ve found many a time in first books by new writers: drawing from their own experiences, sometimes they fail to fully turn that inspiration into wide-ranging fiction.  There wasn’t a problem with the voice itself, just that it was shared by characters in different stories in different places and situations, which makes them seem less like, well, real humans.  Okparanta is at her best when trying on distinct voices, such as in “Story, Story!” and “Grace” as well as “Shelter” (whose narrator is a child).

Interestingly, if you look at Happiness as a whole, it seems to be suggesting that heterosexual relationships are doomed, but ones between women have hope.  It’s not that the queer relationships are painted idyllically, but there is a distinct sense of optimism in the stories that feature romantic relationships between women that is lacking in the ones featuring men and women. Relationships with men and /or heterosexual marriage seem to be too steeped in patriarchal power dynamics to offer women any real options.  While I see the appeal of this argument, it also puzzles me; my first thought is, okay but what are heterosexual women supposed to do?  Also, it feels defeatist, like confirming men will and can never be feminist allies and never have respectful relationships with women.  Is that actually how we want to look at the world?

It’s the system, paired with and run by individual men, that creates and upholds the values Okparanta is writing against and many of her stories actually make a point of focusing on the fact that it is the women’s mothers who are the agents of the patriarchal trap of marriage, as well as enforcing racist and sexist beliefs about women’s roles.  In other words, women enforce patriarchy too, and we won’t get rid of it even if we secluded ourselves away and never had any contact with men ever again.  So, Okparanta’s argument there seems to contrast the one that relationships with men are ultimately hopeless.

Anyway, there’s lot of food for thought in this book, as you can see!  If you want to see more from Okparanta, like I did when I finished the book, check out this more recent story published in The New Yorker as well as this interview with Okparanta about the story.

2 Replies to “Casey reviews Happiness, Like Water by Chinelo Okparanta”