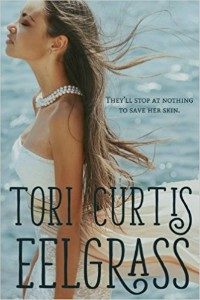 Eelgrass by Tori Curtis is an intimidating book to review because reading it was such a powerful experience that I’m scared of failing to do it justice. It mirrors its protagonist’s span of two worlds — she’s a selkie so both the sea and the shore communities are home — inasmuch as it comfortably straddles Irish historical fantasy and literary fiction (as well as lesfic!) It’s firmly woman-centered; most of the characters are women whose motivation is keeping other women safe.

This is the kind of book where a selkie asks a siren the What are we relationship question. I will reproduce the following deliciously incongruous quote here: “Around here, people decide they want to get to know each other and they — they court. And if that goes well, they marry. Are we courting?” This juxtaposition of conservative, period-piece village daintiness with a literal seal-woman and a bloodthirsty mermaid, I mean, freaking sign me up and sell me the Extras package.

The core of the story is Efa’s drive to rescue her best friend and fellow selkie Bettan from the fate every selkie woman knows about from birth–if a human man gets a hold of your sealskin, you become bound to him. When we finally get to see this up close, it’s a sort of emotional slavery that’s as subtle as feathers but harsh and binding below the surface.

Bettan and Efa’s relationship is the foundation of the book’s story, and I’m very drawn to stories of women as rescuers, especially of each other. I also really like how intense but platonic they were together, because it reaffirms that f/f and f-f friendship stories can support and coexist each other rather than threatening each other. Bettan and Efa literally promise to be best friends forever, which felt good to read.

I loved all the care and thought Curtis put into the details of her worldbuilding. For example, the selkie civilization on human land is more suited to their biology than human villages would be — the houses are very simple, shops are run out of the houses instead of being in separate buildings, etc. In the nearby human village, selkies are accepted as real–they’re othered and exoticized a little, but they’re a familiar presence. In contrast, sirens (called “fishwives” by the humans) are treated as more fantastical. As Efa says:

As for Ninka the Siren/Fishwife herself, here she is in one quote: “Whatever I want. I go exploring, and fish, and bother sailors and seduce young women on the seashore.” Sounds like a nice life! I’d ask where I can sign up, except violins are easily waterlogged.

Ninka is described as “so beautiful Efa didn’t know how she’d ever thought she’d want boys.” Speaking of which, I loved the worldbuilding’s approach to queerness. For example, here’s a conversation between Efa and a male siren:

“A blacksmith,” he said.

Efa scrunched up her nose. “That’s as human as you can get without being a miner,” she said. And then frowned. “Are all sirens – do men always fall in love with other men?”

I like the creative decision to have selkie culture and siren culture show different approaches to male-male and female-female love—Efa’s community never presented it as an option, but it’s totally commonplace in Ninka’s. I don’t think I’ve run into this before, this contrast between two different fantasy creature communities. Usually it’s all “how does this group differ from humans.”

The entire book draws heavily on symbolism that can easily parallel real-world sexual assault, domestic violence, or bisexual women coerced into permanent relationships with allo cis hetero men rather than pursuing happiness with any gender wherever life leads them (which, yes, may happen to be a man like that but that’s different from ending up with one through social pressure.)

The most poignant and pithy representation of these connections is when Bettan asks Efa, “What if he turned me human?” What if he changed me irrevocably? What if I’ve lost something that made me fundamentally me? This works for all of these real-world parallels. Another quote: “You think people can’t do those kinds of things to you, but obviously they can.” And then, when Efa says, “There’s nothing wrong with you. You’re free now.” I’m probably making this sound heavy-handed, but it’s really not. It’s exquisite.

“But no one will take this seriously. It happens all the time.”

“I don’t see why we don’t stop it,” she said. . . . There were selkies who came home ten years, twenty years later, their sealskin won back, and never spoke of what had happened while it was kept from them. There were mothers so determined not to be trapped that they abandoned their sons and daughters. Efa knew people, a dozen of them at least, who stayed away from their human forms forever out of fear that their sealskin might be taken again. She couldn’t imagine losing one world to save the other, but they did it, and trembled at the thought of shedding their sealskins.

There may be some awkward and unintentional racial coding going on in the selkies having slightly darker skin than the human characters–between that and the “lol you’re sexy but exotic and othered” treatment from the human fishermen, plus all the themes of escaping coercion, one could see symbolism for women of color. However, as a fairly light-skinned white Jew, I’m still darker than the white Irish people in my life, so the selkies could still be white if thinking of them any other way gets awkward. A WoC will be better able to speak to this than I can.

Speaking of marginalization, though, the book had a neat moment where Efa forgets about the existence of Deaf people and Ninka (the siren) corrects her. Again, here for a siren “calling in” a selkie as if they were both, like, activist friends of mine or something.

I’m not sure if I was reading an earlier draft because I was given a review copy as a Lesbrary reviewer, but halfway through the book random hyphens started appearing in words that weren’t at the end of lines on the mobile version. It happened at least three or four times and I just wanted to give a heads up that other than this, the book was impeccably edited and didn’t have any other artifacts of Indie Life. Also, I’m not a fan of the cover and feel that it gives the wrong impression of the contents; it looks too modern to me and almost looks like a beachy wedding shoot. Would love to see it with the kind of sweeping fantasy art the story cries out for.

The ending is a little bit unresolved as far as relationships go – there’s an unambiguous f/f ending for Efa that seems like it could lead to future complications (but I’m pretty sure there’s a sequel in the works) plus a m/f resolution for other characters that seemed like a giant maybe. But life itself is unresolved and in continual flow, so I don’t have a problem with this. The plot and adventure part of the story are definitely resolved and complete, and overall this was a riveting read that I’m awarding five stars for quality and being thoroughly absorbing.

Trigger warning for on-the-page controlling husband behavior and “underwater fantasy violence”, as the MPAA might phrase it. These are not Lisa Frank mermaids.

Also, this book will make you thoroughly hungry for fish (if you eat fish.)

One Reply to “Shira Glassman reviews Eelgrass by Tori Curtis”