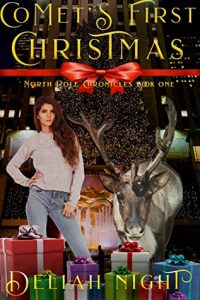 I love sappy holiday movies, and Comet’s First Christmas nailed the sweet and silly tone of some of my favorites, glossing over any plot holes with Christmas magic.  It’s a sweet, earnest, PG-rated novella about a reindeer shifter who falls for an elf. The worldbuilding is excellent, but the storyline is unlikely to appeal to readers who aren’t die-hard fans of North American Christmas culture.

Claudia has never left the North Pole. She spends her days training to join the elite squad of flying reindeers who help Santa deliver gifts around the world. Did you know Santa’s reindeer are all queer women who can magically shift their form?  When a spot on the team unexpectedly opens up at the last minute, Claudia takes the title of Comet, and is assigned to the New York City office, where she’ll work with East Coast elves in the final few weeks before Christmas. Claudia has anxiety and is worried she won’t perform well. Luckily her Personal Assistant elf, Jillian, is smoking hot and supremely competent.

Jillian grew up in New York and prefers it to the formality of life in the North Pole, where the roles of reindeers, elves, and snowmen are tightly prescribed. Jillian’s willingness to think creatively comes in handy when secret Christmas haters hack the reindeers’ communication tech. Will solving this Christmas mystery together give Jillian and Claudia a chance to fall in love?

I found this to be a comforting read, the book equivalent to a mug of peppermint hot cocoa. Comet’s First Christmas is a smorgasbord of classic Christmas cultural references—gingerbread, ice skating, the Nutcracker ballet, decorated store windows, and Santa at Macy’s. Claudia’s anxiety and imposter syndrome made her very sympathetic, and I was cheering for her to see herself the way others clearly did.

I appreciated that unlike most Christmas romances, the worldbuilding wasn’t US-centric. Comet’s route stretches from Brazil to Canada, and Claudia spends a few memorable scenes eating her way through the Singapore office. There’s even a brief mention of the ethics of Western museums with stolen artifacts.

I didn’t enjoy the romance as much as the other story elements. Claudia falls for Jillian instantly, and basks in her beauty and nurturing spirit. But the book didn’t describe why Jillian would quickly fall for Claudia. The two are tongue-tied and awkward around one another, and their professional dynamic sometimes made it feel like Jillian was mothering Claudia. The two of them felt young, and the simplistic style of the book made the romance seem immature.

Part of the plot focuses on humans who have “lost their belief” in Christmas, with Claudia and Jillian trying to convince “nonbelievers.” I prefer secular Christmas romances, and while Comet’s First Christmas is never overtly religious, I could have done without this proselytizing. Most of the book focused on the collective action of many people working together to spread Christmas magic, so emphasizing the exclusivity of Christianity felt out of step. The mystery behind the plot to ruin Christmas is only partially resolved, so the ending wasn’t as satisfying as I’d hoped.

Shifter romances have a reputation for wild sex scenes, but I didn’t mind that this low-heat romance is sweet, rather than sexy. The camaraderie of Claudia’s fellow reindeers working to make the world a happier place, puts friendship and chosen family at the center of this fluffy queer novella.  Comet’s First Christmas is unapologetically and intensely Christmassy, which will either make readers devour it as quickly as I did, or want to run away.