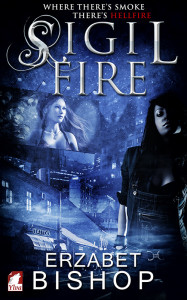 Sometimes, though the spirit is willing, the flesh is weak. And sometimes a novel idea that sounds great in the planning stages just doesn’t work in the execution.

As John Updike says in the his 6 Rules for Constructive Criticism, “Try to understand what the author wished to do, and do not blame him for not achieving what he did not attempt.”

So here’s the synopsis of the book, and we’ll go from there:

Sonia is a succubus with one goal: stay off  Hell’s radar. But when succubi start to die, including her sometimes lover, Jeannie, she’s drawn into battle between good and evil.

Fae is a blood witch turned vampire, running a tattoo parlor and trading her craft for blood. She notices that something isn’t right on the streets of her city. The denizens of Hell are restless. With the aid of her nest mate Perry and his partner Charley, she races against time before the next victim falls. The killer has a target in his sights, and Sonia might not live to see the dawn.

Now I enjoy fantasy, and nontraditional portrayals of scary-monster things is awesome as long as they’re not sparkling in the sunlight. This is definitely meant to be  something a little nontraditional and edgy, throwing some vampires and succubi and whatnot into a murder mystery mixed with some steamy lesbian romance– and lesbe honest, that’s not a plot you can take too seriously, so camp it up and have fun, right? I mean, this is starting to sound pretty awesome!

Weeeeeell, I’m not sure the author quite succeeded at that, though she certainly made an earnest attempt.  We can’t fault her for trying, at least. The writing is not terrible – at least the grammar is there, though the plethora of adjectives sprinkling this piece are like cockroach legs in a streetside noodle stand (namely, distracting and bad for the digestion.)  The tone of this work is just too serious for the plot. There could have been some comedic genius moments, but instead it’s all hard-hitting demon investigators and love-torn succubi with eating disorders.

And then there are the awkward lesbian sex scenes. Let’s just say there’s only so many times you can say “juices” in one scene before my eye starts to twitch, and “seeping pussy” puts me in mind of something decidedly non-erotic. I feel like “seeping” should never, ever, ever in a million years be used to talk about anything relating to sex. It’s just one of those words, like ‘moist,’ that are just Not Okay. Now, writing sex scenes is easy. Writing sex scenes well is incredibly difficult. Bishop doesn’t hold back in the use of her description, which is fine and great and not what I have a problem with. Other than her questionable use of adjectives (seeping? Really?) what I have a problem with is that I can’t really get into the characters’ emotional involvement – the scenes just read like cheap erotic fiction shoved into a lackluster crime novel. Much of Bishop’s oeuvre consists of varying genres of erotica, but it seems in Sigil Fire like these two separate things shoved together: the crime mystery interspersed with bits of erotica that don’t really carry the plot forward, develop the characters in any meaningful way, or even arouse the reader. Maybe Bishop should stick to either one or the other.

I really wanted to enjoy this book because I thought it had a great premise and a lot of opportunity for creativity. But it just didn’t live up to any of my expectations. Unless you’re a big fan of Bishop already or absolutely love the synopsis, I wouldn’t recommend it.

One Reply to “Nicole reviews Sigil Fire by Erzabet Bishop”