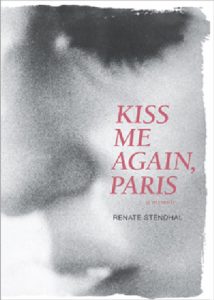 Never has a memoir enraptured me as completely as Kiss Me Again, Paris. Renate Stendhal reached through the pages and took me by the hand, pulling me back into Paris in the 1970’s and into her skin. To read Stendhal’s account of her life in Paris is to live it. Never has reading a book felt so much like watching a movie. Every intricate detail she dives into came alive before my eyes, not just through her masterful prose, but through the gorgeous pictures scattered throughout the memoir.

Although there are two explicit love stories present in Kiss Me Again, Paris, the implicit love stories between Stendhal and her friends, and Stendhal and her city are the most visceral. Paris is Stendhal’s mistress, more so than any of the lovers she describes, and her love for the city and the life she lived there is breathtaking. I myself have only been to Paris once, but after reading Stendhal’s memoir I feel as though that is not the case. I have never yearned for a city as I yearned for Paris while immersed in this book.

During many scenes depicting Stendhal and her friends, I knew I should feel like an outsider, privy to a conversation far too intimate for my perusal, but that was never the case. I will admit, I had a bit of a hard time keeping track of all the women in Stendhal’s life–which backstory corresponded to which name, and with whom had she slept? Still, the closeness of her tight-knit group of “Sinners”, as they called themselves, made it easy to forget my confusion. Regardless of backstory or personal history, the love Stendhal felt for these women shone through. These are friends who can call each other whenever one is in need, and within minutes they are at each other’s doors. They dance together, they drink together, and they love together. The atmosphere of Paris just adds another layer of decadence to their lives.

Stendhal’s feelings toward the two women her heart aches for in her memoir–a fickle actress named Claude and a mysterious red-headed woman who keeps re-appearing in her life–are the strongest throughout the memoir. She lays it all bare for her audience. Every lustful thought, every prickle of jealousy, every irrational moment of hope or despair. I craved more knowledge on the so-called “Woman in Red”, desperate as Stendhal was to know more, to be near her. As the story unfolds, I often found myself looking up Stendhal and her life-partner Kim Chernin on Wikipedia, hoping to gain even the smallest hint that Kim Chernin was the “Woman in Red”. Unfortunately, I found none, and it makes me wonder how such a deep, wonderful, all-consuming love story could have eventually found its end. I was hooked on Stendhal’s every word, and my heart pounded with every emotion she felt. Her frustration with Claude, yet desire to continue seeing her. Her questions about the “Woman in Red”, her obsession with learning more about her. It was as though Stendhal had a hold of my heart, making me feel all the anguish, hope, and love that she herself felt.

The book is not perfect, of course. It is riddled with casual transphobia that would have been common-place in the 1970’s, but feels rather shocking to read in a book published in 2017. There is, as well, at least one racial slur for Romani people within the text, and a prolonged and explicit scene depicting a girl between the ages of twelve and fifteen being photographed entirely nude.  Still, despite these short-comings, Kiss Me Again, Paris brings the author’s experience to life better than any other memoir I’ve read. The specificity in the detail is astounding, and the decadence in the language will leave you begging to read more.

Kiss Me Again, Paris by Renate Stendhal will be available for purchase on June 6, 2017.

One Reply to “Megan G reviews Kiss Me Again, Paris by Renate Stendhal”