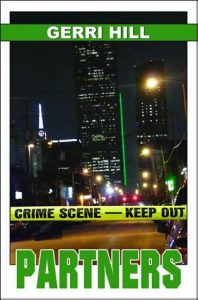 Partners is the conclusion to Gerri Hill’s Hunter trilogy (the previous books reviewed here and here.), and it brings the trilogy round full circle. Casey, the detective introduced in In the Name of the Father, has officially joined the homicide department and has been assigned to partner new detective Leslie Turner on a serial murder case, which would go better if they didn’t find each other intensely distracting.

Okay, this book.There are things I genuinely quite like about it, so let’s start there. Sam and Tori, the detectives who started this series have hit a delightful stage of warmth and commitment–they’re buying a house together, Tori has adopted Casey as a sister, everything about the family that they’ve built is lovely. The revelations about Casey’s backstory and family history are very well done, because I was absolutely furious about it; “I don’t have a problem with homosexuality as long as it’s not my daughter” is an awful thing and the book acknowledges that very well. The way that Casey deals with it by building her own family felt very true to me. Plus I feel like the “hurry up and wait” pace of the investigation works quite well for building the character relationships and for representing police work a smidgen more realistically. It’s tense and dramatic when it needs to be!

(I think this nod to realism is why no one’s backstory gets resolved; Tori’s backstory was deemed unsolvable in the first book, and Casey’s officially given up on hers, which I can respect from a writing standpoint but am somewhat frustrated by as a reader.)

But despite the things that I like about it, it has some quite significant flaws that I have to mention. Please bear with me.

First and most obviously: the relationships. I mentioned above that I appreciated the family that is being created, but the beats Casey and Leslie’s relationship hit are remarkably similar to the ones that Tori and Sam hit in Hunter’s Way. Stop me if this sounds familiar: an openly queer detective falls reluctantly in love with a woman who a) is in a relationship with a sexist man that she does not love and b) has to contend with the fact that she is actually a lesbian. (Once again, bisexuality isn’t an option!) The reasoning for the characters is different, but it’s very similar, and I couldn’t honestly tell you if it’s a deliberate contrast of the value of support networks and/or realising that not being straight is an option, or just a retreading of the same story.

Second of all, I have some issues with the representation in this book. There is one (1) person of colour in this book, who does not any lines and is regarded with active hostility from one of the main characters for someone else’s actions in the first book. The depiction of mental illness is not great, with the character in question treated as a childlike innocent by both characters and the narrative (even though he is a peeping tom?) and SPOILERS: he is thrown under a bus for a neurotypical woman. And while we’re still doing SPOILERS: the murderer is assigned male at birth (it’s not clarified how they actually identify) and wears a dress to gain access to women’s apartments so they can commit murder. I know the book was written in 2008 and the author had no way of knowing that would be the core surface-justification of awful transphobic panic in 2016/17, but seriously. I am willing to anti-rec Partners on basis of that alone.

… Also while we’re doing SPOILERS, the ending is full-on “DON’T GO INTO THE BASEMENT THIS IS A HORROR MOVIE!” levels of nonsense, and it’s completely out of character. I was so annoyed.

The long and the short of it is that I don’t think I can recommend this book. There’s nothing wrong with it on a technical level, and the depiction of friendships and romance between the lesbian character’s is fine? But there’s enough going on around those relationships that I’d be uncomfortable recommending it.