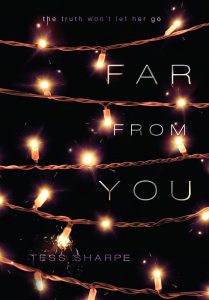 Sophie Bishop was clean when her best friend Mina was murdered before her eyes. She’d been clean for nine months, two weeks, and six days. Not that the police or her parents believe her, especially considering the evidence to the contrary found in her jacket pocket. Everybody thinks that Mina’s death was a drug deal gone wrong, but Sophie knows different. She knows Mina was murdered; what she doesn’t know is why. But now that she’s out of a stint in rehab that she didn’t need, she’s determined to find out.

Published back in 2014, Far From You was not originally marketed as an LGBTQ+ novel. The blurb on the back gives no explicit indication that Mina and Sophie shared any form of romantic attachment, other than a cryptic mention of a “secret” they share. Despite all this, Far From You does not read like a typical “gay plot twist” novel, because that is not the point. Mina and Sophie’s relationship is hinted throughout the book, and explicitly revealed about 40% of the way through. The point of the novel is Sophie trying to solve the murder of the girl she loved. There is no double plot twist where we find out who murdered Mina and that she and Sophie were lovers at the same time. All things considered, it could have been dealt with a lot worse.

Because of the inherent plot of the novel, I’m sure you won’t be surprised by the warning that this book deals with a dead lesbian. It also deals with a character who is a drug addict, having become addicted to pain killers during her recovery from a traumatic car accident, which left her permanently disabled. This second aspect of the novel, while dealt with in depth, does not mention that not all people who take this type of narcotics will become addicted to them (and the author, Tess Sharpe, is aware of this and has discussed it on her twitter). So, if this is a trigger point for you, I would recommend avoiding this novel. Tess Sharpe has also talked about the problematic aspects of the dead lesbian trope on her twitter (though I am having trouble finding the link to that thread right now). Hearing her talk about these issues is actually what encouraged me to give this book a try. Knowing the author is aware of the problematic aspects of her stories makes me more interested in reading them, as I know that any future writing will most likely avoid those same tropes.

A couple more warnings about this novel include some ableist language (mostly spoken by a disabled person about herself), and a lack of diversity in the characters. It is set in a small town, so the fact that nobody’s skin colour is described heavily implies complete whiteness. As well, there are no fat characters, or any character’s that live outside the gender binary. Again, this can be explained by the small-town setting, but still bears mentioning. There is also some explicit violence, and [major spoiler warning] talks of a sexual relationship between an underage girl and an adult. [end spoiler]

I’m a lover of all murder mystery, and that aspect of this novel did not disappoint. I love when I cannot guess who the murderer is, especially since, after all the murder mysteries I’ve read, I tend to suspect everybody. This time, I was caught off guard. The second plot twist was a little less shocking to me, as I felt [minor spoiler warning] that the character wasn’t as developed, and therefore the reveal made less of an impact. Still, Sharpe does a fantastic job of slowly unraveling the mystery, and keeping you guessing until the very last moment.

The characters are fantastic. Fleshed out and flawed. Sophie makes for an incredibly dynamic lead. I was happy that her disability is continuously dealt with throughout the book, instead of shoved under the rug or forgotten. She also makes for a fantastic witness in a murder mystery, considering how unreliable she is based on her drug problems. Of course, if that weren’t the case the police would have solved the mystery a lot sooner, but what would be the fun in that? Also, I find it very important to point out that Sophie explicitly calls herself bisexual, which surprised me for a book that wasn’t originally marketed as queer.

Overall, this book is fantastically written, and provides a host of dynamic (though, admittedly, homogenous) characters. It is emotional and will probably have you reaching for the tissues more than once, as it’s portrayal over the grief of losing someone you love (especially someone nobody knew you loved) is incredibly real. Head the warnings, but if you enjoy YA fiction, and murder mysteries, as well as well-developed bisexual characters (who also happen to be disabled!), then definitely give this book a try. I promise it will make you smile, even as it breaks your heart.