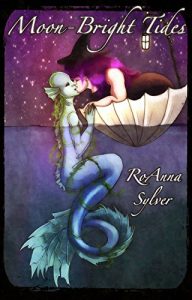 First of all, do I really need to say anything other than “sweet romance novella between a witch and a mermaid” in the first place? But I have lots more to say about Moon-Bright Tides by RoAnna Sylver, which rocketed to the top of my f/f fantasy recs list as soon as I read it last month.

“If you ever fear the water again, remember that I’m in it.” That was the point where I teared up and started flailing on Twitter.

It’s easy to reel me in with a fairy-tale about healing from trauma, but this one was exceptionally well done with prose that’s both well-crafted and easy to swallow, like the stew our witchy heroine leaves brewing for herself every night via the magical equivalent of a crockpot (which is just “hey, pot of stew, be warm when I get back to the dock, mmkay?”)

Sylver creates what I can only describe as a “beautiful dystopian” — this is a world where what’s gone horribly wrong is that humans, in some undescribed catastrophe, managed to destroy the moon. In its place, a lonely witch named Riven paddles out in her boat every night to call the tides.

The setup may be fanciful, but her sorrow and loneliness as she grieves for the rest of her family, lost to the sea, is familiar and real and stripped raw of any of the distance one might suppose the fantasy elements might grant. She’s also longing for a different kind of life, one she hasn’t even really identified yet at the beginning but comes to understand, in which she’s still serving others but in a different capacity.

Enter a mer, unidentified in name or gender at first, but who turns out to be female. Sylver does a good job of making mer culture seem distinctly different from humans; when Riven tries to explain that the sounds of her name doesn’t mean anything, the mer reminds her “they mean you.”

The text heavily suggests that Riven is neurodivergent, with several references to other people reacting badly to her conversation, or to her frustration with hidden rules about what questions you’re allowed to ask. In contrast, the mer, who does wind up with a human translation of her mer name over the course of the story, accepts and likes Riven’s way of thinking and speaking. Also, Riven is fat, which you can see on the cover, and this is presented as completely neutral and that kind of thing is important.

Much of what makes this story so special is hard to explain without spoilers, but we are given progressively more and more beautiful reveals to unwrap until I wept at the quote with which I began this review.

At ten thousand words, it’s possible to read it in one sitting, yet it’s also a complete and satisfying happily-ever-after.

This a good read for people who are easily freaked out by too much worldbuilding. This is one of the easiest to parse fantasy setups I have ever seen. It manages to be fresh and creative and magical while not confusing me at all. I know this sounds weird for a fellow fantasy author to say, but then again, my series is basically “what if all the things I like lived in a palace in my childhood city.” Here’s a thread about what I’m talking about. But anyway, RoAnna Sylver gets it so right, maybe partially because in the course of explaining themselves to each other, the witch and the mermaid are also letting us-the-audience in slowly at a reasonable pace.

This is also a recommended read for those looking for f/f romance that isn’t sexually explicit. (In fact, heatwise it’s probably at the level of a Disney princess movie, although I’m not sure I can say the same about some of the implied offscreen violence in the book’s past.)

Here’s a Gumroad link if you’d prefer pdf to Kindle.