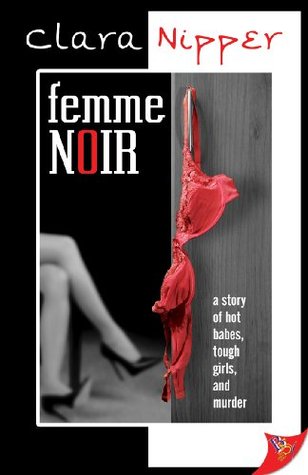 I read Nipper’s latest book, Murder on the Rocks, before I read this one. That was a mistake, because the two books are so different in quality. In fact, I began Femme Noir thinking that it would be really bad. It is not, although the two books have several elements in common. First, both take place in good old Tulsa, Oklahoma, although Nora Delaney, the main character in Femme Noir is a visitor while Jill Rogers (from Murder on the Rocks) has lived there all her life. Second, both are butchy. Third, both like to play with fire (oh oh; have I just uncovered some symbolism? I wouldn’t be surprised)—Nora has a habit of lighting wooden matches with her thumbnail while Jill snaps a ubiquitous Zippo lighter open and closed throughout her adventure. And both think about sex approximately 40 hours every single day. Both are minorities: Nora is African-American; Jill is Native-American.

Well, the good news is that Femme Noir,is better than Murder on the Rocks, although to actually call it noir you have to alter the word’s definition. It is more in the tradition of books like Jaye Maiman’s I Left My Heart, where the protagonist is called to another city when an ex-lover is murdered. In this case, it is a woman that Nora lived with for three years in Los Angeles before the woman moved to Tulsa. In the course of Nora’s investigation—the police are rarely, if ever, mentioned—she finds out a lot about her ex-lover that she didn’t know.

She also learns about the 1921 Tulsa race riot—which was one of the worst in United States history—in which the most affluent black community in America was burned to the ground, dozens were killed, and hundreds arrested. As Nora’s research continues, she finds reason to believe that her ex-lover’s murder is directly related to that fateful event almost a century earlier. It is an important inclusion, but it is not the only thing that brings this book up above the ordinary. Many of the scenes that include people she meets in Tulsa are fresh and humorous; a scene in an alternative bookstore featuring a lesbian on roller skates is one of the funniest in the literature. And the second half of the book is just plain well written. There is no trace of the unfocused author of Murder on the rocks.

It is not all good, though. Otherwise it would have won prizes, right? It was enough for Nora to look into the Tulsa race riot without having her new white friend Jack go into a tearful, drunken tizzy when he even thinks about it. And Nipper has a bad habit of having her protagonist drop everything to go into an almost pornographic fantasy about Max—her current love interest—although I have to admit that the last time she does this is a hoot. The rest are superfluous and boring. Think about it: reading about sex is not as exciting as actually having it, but reading about someone thinking about sex is another layer removed from the real thing.

There is something about this author that intrigues me. On a personal level, I like the fact that she works for the safety of animals, that she is a roller derby queen, that she feels it is important to let her readers know about the Tulsa race riot—which had been hidden from public knowledge for 90 years—and that writing is the most important thing in her life. I think it is interesting that Nipper—who some might describe as a voluptuous blonde if her pictures do her justice—makes her protagonists minorities. It is even more interesting that the love interests of the both protagonists—Max and Sophie—are not only almost interchangeable, but they are described as voluptuous blondes.

Give this one anywhere between a 3 and a 4 that you wish. I’ll say 3.7. Both of these Noir Series books are currently available as e-books at a very reasonable price.

For 200 other Lesbian Mystery reviews by Megan Casey, see her website at http://sites.google.com/site/theartofthelesbianmysterynovel/  or join her Goodreads Lesbian Mystery group at http://www.goodreads.com/group/show/116660-lesbian-mysteries